How much can you earn from a freeplay mobile MMOG?

Top analyst has done the sums 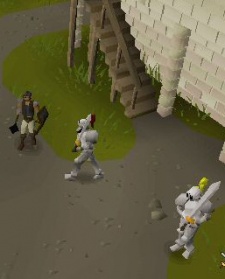 June 11th, 2008 - 11:00am
By Stuart Dredge, Contributing Editor
There aren't many mobile MMOGs (massively multiplayer online games) yet, and the most successful have been in South Korea, with little evidence so far on whether they'll be as popular here in the west.

As a result, business models are still up in the air. However, if mobile follows trends in the PC / online MMOG space, we could see more games using a freeplay model, and generating revenues from item sales and other microtransactions.

But how much can you expect to make from this? Jeremy Liew from VC firm Lightspeed Ventures has been doing the sums for some popular online MMOs and virtual worlds, including Runescape, Habbo, Second Life and Club Penguin.

His conclusion? These companies are generating an average of $1.40 a month per active user. "Having spoken to many other MMOGs and virtual worlds on a private basis, this estimate seems to be a good gauge for what a well performing MMOG can aspire to from a free to play business model," he writes.

If mobile followed the same pattern, then from a freeplay mobile MMOG with, say, 50,000 active users, you could expect monthly revenues of around $70,000.

Although if the micropayments are made simple through premium SMS, perhaps there's an argument that this ratio could be higher on mobile than online.

In a separate piece of research, he's looked at what percentage of freeplay MMOGs' players pay, citing examples like NCSoft's Dungeon Runners (25%), Jagex's Runescape (17%) and 3Rings' Puzzle Pirates (15%), while admitting that most games are more around the 9 per cent mark.

Anyway, all of this info should be useful for anyone considering launching a mobile MMOG.

Now for the debate: what do you think? Are these stats likely to translate to mobile, and if so, how big will the demand be in the west for such games?

Reply
Christian Lohr Co-Founder at Deep Silver Fishlabs
Sounds very interesting and of course there will be a huge market adressing Gamers that are not in front of their pc. Just calculate all the hours you have sitting in a bus, Train, Toilet, Red Signal...and having your mobile with you. Lots of hours, lots of items in an MMOG lots of money
Posted 12 years, 10 months ago