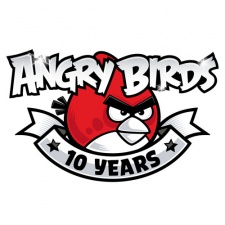 Angry Birds today celebrates its 10th anniversary, with developer's Rovio releasing a retrospective trailer looking back at the history of the franchise.

Alongside this, the Finnish studio announced a collaboration with PUBG Mobile that will see items from the Angry Birds universe make an appearance, a themed mini-game and an Angry Birds Adventure event that will provide new missions for players.

On top of this, the studio has partnered with US shoe brand K-Swiss for two limited edition pieces of footwear based off the game’s most popular characters.

Angry Birds mobile games have been downloaded 4.5 billion times, with the original becoming the first mobile game to reach one billion downloads as well as the first game ever to be played in space.

Nine installs have even been recorded in the most remote location on Earth, Antarctica, while over 1.8 billion Angry Birds consumer products have been sold.

As part of the milestone, Rovio launched its #BringtheAnger campaign which saw the firm release an anger-powered Angry Birds "venting" machine in Time Square as well as an anger-fueled scooter nicknamed Rage Riders.

“Angry Birds has grown into a phenomenon that has reached beyond anyone’s expectations,” said Rovio CEO Kati Levoranta.

“The Bring the Anger campaign is the perfect extension of the commitment to good causes that Angry Birds has shown over the years.

"Not only as an example of the birds’ good works but an example that the players are truly the ones responsible for the Angry Birds’ success."

To coincide with the anniversary, we spoke to Rovio Chief Marketing Officer Ville Heijari about Angry Birds’ unexpected decade-long success.

Rovio’s studio head Michail Katkoff is also due to speak at Pocket Gamer Connects London, which will take place from January 20th to 21st, 2020. You can find out more information here.

Rovio to utilise machine learning to create individualised games by 2022