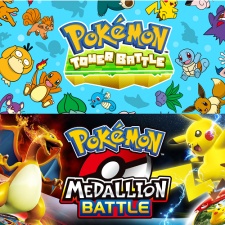 Facebook Gaming has partnered with The Pokemon Company to launch two new Pokemon games exclusively on the platform.

Pokemon Tower Battle and Pokemon Medallion Battle will both launch today on Facebook Instant Games, accessible through the Gaming tab on the app and a bookmark on the social giant's homepage.

Developed by Indian studio Bombay Play, Pokemon Tower Battle is a physics-based puzzler with strategic elements where players compete to create the tallest towers of the Pocket Monsters.

Users can encounter, catch and level-up rare Pokemon before going head to head against friends or across a global leaderboard. Pokemon Tower Battle is available to play across all regions worldwide.

Pokemon Medallion Battle from Californian developer GCTurbo is a digital card battle strategy game. Here trainers collect, battle and evolve Pokemon in medallion form before embarking on a journey with companions to win gym badges and complete their Pokedex, akin to the mainline series.

"We are excited to launch two new entries in the Pokémon franchise on Facebook Gaming,” said The Pokemon Company CEO Tsunekazu Ishihara.

“Launching these games through Facebook will allow people all over the world to experience Pokemon in digital form, and we are especially thrilled to collaborate with Facebook Gaming in enabling new audiences to enjoy Pokemon games online."

PocketGamer.biz has reached out to Facebook for confirmation whether both Pokemon games are permanently exclusive on the platform or limited time only.

Facebook will be hoping for the same kind of success that Niantic's Pokemon Go has achieved in its three years since launch. Most recently the augmented-reality title crossed $3 billion in lifetime gross revenue.