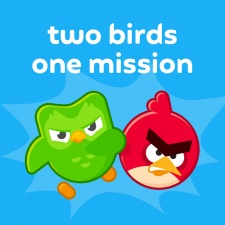 Rovio has partnered with Duolingo for a crossover promotion partnership across the language-learning app and Angry Birds 2.

The collaboration will see Angry Birds' protagonist Red appear alongside Duolingo mascot Duo to encourage users with their work while engaging in "humorous dialogue". The crossover will last for one month starting February 18th, 2020.

Furthermore, Angry Birds 2 advertisements will play in the form of rewarded video placements on Duolingo, giving users the option to download the slingshot mobile game.

The final part of the deal will see Duo join the cast of characters from Angry Birds 2 in a mini-game. Here, players can slingshot the green owl to destroy structures for points.

Meanwhile, Rovio soft-launched a new Angry Birds game in the US and Mexico