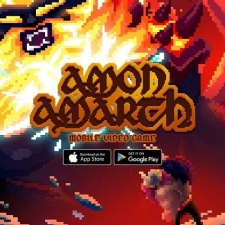 Amon Amarth - Berserker Game has been created to help promote the group's Berseker album which released last year. Three songs from the album will feature in-game via the soundtrack across different levels.

Ride & Crash describe the game as a "retro-styled Viking sidescroller". Set in the 'Ancient Kingdom' of England, players control an inebriated version of Thor, the god of thunder, and battle hordes of enemies to claim the land.

This is the second time both companies have collaborated together, after releasing the self-titled premium game Amon Amarth on mobile in 2017 for $8.99.

To celebrate the launch of the mobile game, the top 100 players worldwide will receive a gift from the metal band up until April 30th, 2020.

Amon Amarth - Berserker Game will launch on iOS and Android on February 21st, 2020.

In January, Jägermeister's Track and Build competition announced that it would offer indie game studios the chance to have their soundtrack produced by bass duo Koven.