Starting with three of their 3D titles 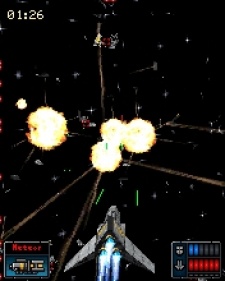 The two companies are kicking off with three of Fishlabs' games: Galaxy on Fire (pictured), Planet Riders, and Tank Raid. They'll be offered both through Greystripe's own GameJump portal, and through its network of sites run for other companies.

It's good news for gamers, because Fishlabs has a great reputation for its rich 3D mobile games. They've tended to be released as paid-for downloads through publishing deals with the likes of I-play and Player X.

Fishlabs reckons that the nature of its games makes them particularly suitable for ad-funded distribution, as people play them for longer, and for more sessions.