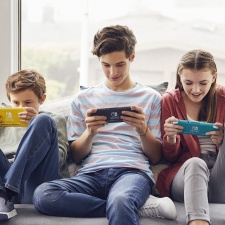 The UK games industry has launched a new initiative to take place this weekend called Play and Talk.

It is part of the Department for Digital, Culture, Media and Sport's #LetsTalkLoneliness campaign, and is happening as part of the National Loneliness Awareness Week. Over 50 companies have shown support for Play and Talk, with Electronic Arts, 2K, Wargaming, Sega and Ubisoft among them.

"Video games have given many of us a form of escapism in lockdown and brought many people together as they connect online," said creative industries minister Caroline Dinenage.

"So this weekend, as part of our Let's Talk Loneliness campaign, I encourage people to pick your game of choice, play with family and friends but also take time to talk about how you are feeling and faring.

"We have to take a variety of approaches to tackle loneliness, and I am delighted that the video games sector is on board supporting our important work in this area."

Over the weekend, people will be encouraged to find some time to use online games as a means to reconnect with family and friends in an attempt to combat potential loneliness. The Office of National Statistics recently conducted a survey which found that the people aged 16-24 are 50.8 per cent more likely to have experienced loneliness during the COVID-19 lockdown.

"We've seen people around the world turn to video games to socialise and have fun with friends and family during the pandemic," said Ukie CEO Dr Jo Twist OBE.

"It's when we're in these friendly and relaxed environments that we feel most at ease opening up, and right now there's no better or safer way for people to do that than in video games."

British trade body Ukie has taken various steps to aid people during the pandemic. In April, it launched a new initiative for NHS workers which gave them access to 85,000 free games. Furthermore, it teamed up with suicide prevention Campaign Against Living Miserably. It offered advice for online and family gaming.