The speaker lineup for September’s online-only event continues to form; who will you be learning from? 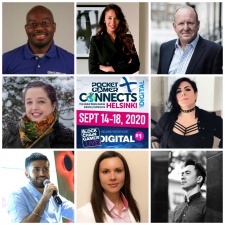 Pocket Gamer Connects Helsinki Digital 2020 goes live on Monday, September 14 to Friday, September 18, and we’re delighted to announce the next set of speakers for this fantastic event.

Over 1,500 industry professionals from all around the world will log onto their computers to hear from more than 250 of the world’s leading authorities in the games industry on a total of 21 themed conference tracks.

Each track will be streamed live, recorded and made available on demand, so you can interact with our speakers during their talks through our Q&As or catch up at a later time if you can’t quite make the stream.

Without further ado, who will you be learning from online this September?

Changes in the industry in the last 12 months

The current global situation has been tough on all industries, even the games industry. Although COVID-19 hasn’t stopped Wixel Studios’ COO and co-founder Reine Abbas, as she joins us for Pocket Gamer Connects Helsinki Digital with a session titled - ‘You think COVID is a crisis? I’m creating games from a country where COVID is a mini-game’ - where she aims to show you how she carried on creating games during these tough times. Meanwhile, Deconstructor of Fun’s founder Michail Katkoff looks at the second wave of games and coming back from COVID-19.

Walk through the history of Firescore Interactive with co-founder Karan Khairajani as he discusses the process they have undergone since they released Soap Cutting with publisher Crazy Labs and how this publishing deal led to opening a hyper casual gaming lab amidst the COVID-19 pandemic. Speaking of Crazy Labs, head of publishing Moria Goldstein Toren provides a practical guide on how to turn your casual production team to a hyper casual commando unit. Criterion’s head of studio operations Steve Cuss offers his lessons on becoming a remote AAA studio

Paladin Studios’ CEO Kay Gruenwoldt hosts a follow up session from Pocket Gamer Connects Helsinki in 2019 where he looks back at the last 12 months in the games industry from Paladin Studios’ perspective, sharing numbers, data and facts about what happened at the studio and them in the business.

Building communities and the design of games

Smilegate’s product manager Jiwon Kim talks with a panel of expert speakers about designing the perfect gameplay time and flow. Mediatonic Games’ senior game designer Arran Topalian focuses his talk on psychology in game design and the potential importance of continuing its application in game design. RE:BIND.io’s founder and lead writer Emily Rose, with a panel of other experts, looks to identify the power of expression in games.

Suitably enough for our annual return to our home from home, Helsinki Games Capital’s managing director Gabriele Aimone features on a panel discussion which looks at the future of Finland’s games industry.

And while our show is named ‘Pocket Gamer Connects Helsinki Digital’, we are truly a global conference, with coverage on different markets. Brazil Games’ executive manager Eliana Russi offers her insight into the Latin American industry and the size of the market. We also have Carry1st’s head of games Nick Murray and chief of staff and partnerships lead Sean Gotkin getting together for a fireside chat on publishing games in Africa. Additionally, Murray also hosts a panel where he will be discussing with A Thinking Ape’s CEO and co-founder Kenshi Arakashi plus more experts about moving to retention as a focus to making money.

We're thrilled to welcome back Sumo Group’s non-executive chairman Ian Livingstone and living legend who joins us once again, this time in conversation with Hiro Capital’s founder and general partner Luke Alvarez for a joint session detailing the journey from developer to investor.

Another hall of fame games veteran is Game Dragons’ director Philip Oliver, who will join Play Ventures venture partner Anton Backman, London Venture Partners general partner David Gardner and Makers Fund’s partner Michael Cheung to discuss what investors are looking for now. And while we’re on the topic of investors, a panel featuring Quantum Tech Partners’ founder and partner Jim Perkins, Consulate General of Finland LA trade commissioner Zsuzsa James and London Venture Partners’ analyst Harry Hamer shows you why your publisher pitch isn't working on investors. Meanwhile, Quantum Tech Partners’ founder and partner Alina Soltys discusses with a panel about the next big acquisitions and what is driving them.

Esports, games on the big screen, and beyond games

The esports industry has grown exponentially over the past couple of decades. Acolyte’s founder and esports lead Tyler Bond, British Esports Association content director Dominic Sacco and EVOS Esports’ regional head of marketing and PR Allan Phang look at how esports is the new ‘sports’. Whereas Fnatic’s partnerships manager Edward Gregory discusses partnerships with brands in and around esports. British Esports Association’s head of education Tom Dore provides a session on esports and education.

According to Critical Force’s CEO, founder and chairman of the board Veli-Pekka Piirainen, mobile esports will finally make its mark in 2020 with substantial growth. He looks at the state of mobile esports at the moment, who the big players are, the challengers and what the future looks like.

Supremacy Games’ CEO and creative director Jari Pauna features on a panel discussion about what TV and films need to learn from the games industry. Thoughtfish’s CEO and creative director Christina Barleben talks about turning the whole world into your playground. While Recontact Games’ co-founder and producer Simay Dinc will also share her expertise digitally this September.

Don’t miss out on the chance to hear from these amazing speakers this September and book now for Pocket Gamer Connects Helsinki Digital 2020. If you book now, you could save more than $300 with our Early Bird prices. What are you waiting for?

Azarus.io’s CEO Alexander Casassovici on how creators can drive watchtime and playtime to their games