"The digital controls that Sentons provides takes mobile gaming to the next level, creating a seamless and innovative experience" 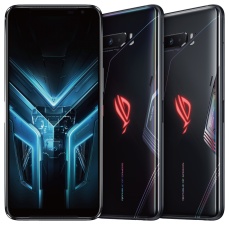 Tencent and Asus' ROG Phone 3 is the first device to launch in the Chinese market with Sentons' SDS GamingBar.

The companies chose to integrate the GamingBar into the new device to power the "air triggers" feature for the phone, offering an improved experience over the previous ROG model. For example, in a shooter, a simple tap allows players to fire, while squeezing the device will reload the weapon. Tencent and Asus unveiled their ROG phone last July.

"AirTriggers were, far and away, the best decision we made in the ROG II and one of the most loved by our gamers. No other solution allows gamers to interact effortlessly with the edge of their device to tap and reload in one game, then swipe away enemies in the next," said Tencent Gaming.

"When you put Sentons technology in your hands, you truly understand just how clumsy and primitive buttons are and how limiting they've been for gaming. The digital controls that Sentons provides takes mobile gaming to the next level, creating a seamless and innovative experience."

Sentons' tech allows manufacturers to change the edge of their devices into an interactive surface. As such, it eliminates the need for physical buttons on the mobile phone.

Not only have Tencent and Asus embraced the SDS GamingBar, but technology specialist Lenovo has also used the tech for its first-ever gaming phone, Lenovo Legion Smartphone.

"When we decided to launch our flagship Legion smartphone, we knew we'd need a way to programme the sides of the device to function as well as the controllers that come with traditional consoles, and it quickly became clear that partnering with Sentons was the best way to do that," said Lenovo general manager of mobile Mr Chen Jin.

"We were extremely impressed with their team's ability to configure their GamingBar to fit not only the specs of the phone but also allow us to continue adding value over time through over-the-air firmware updates."