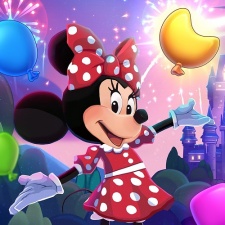 Ludia has soft-launched Disney Wonderful Worlds on Android devices across Indonesia and the Philippines.

The Canadian developer confirmed the testing of its new mobile game to PocketGamer.biz, ahead of its expected global launch early next year.

Disney Wonderful Worlds is a free-to-play puzzler that will see the likes of Minnie, Mickey, Aladdin, and other classic Disney characters feature as players solve puzzles, before going on to build their own theme park.

Events will take place throughout the day such as a "Mid-Day Parade" and "Evening Fireworks Show".

"The sky's the limit in this puzzle-meets-builder game!" reads the game's description.

"Swipe and match colourful gameboards to win prizes, and unlock iconic Disney attractions from around the globe to place in your park. Level up and build your unique park with exclusive decorations, landmarks and characters."

A number of gameplay clips have surfaced online giving players a glimpse at what to expect from the partnership between Ludia and the Walt Disney Company.

Players can pre-register for Disney Wonderful Worlds across both iOS and Android through the official site.

Head on over to our soft launch page to find the 55 top games currently in soft launch, including Crash Bandicoot: On the Run, Hay Day Pop, Tom Clancy's Elite Squad, and more.

We recently spoke to CEO Alex Thabet on why he believes Disney Wonderful Worlds is different from other match-three puzzlers.