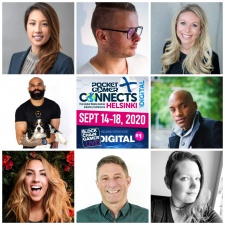 It is just over a month before Pocket Gamer Connects Helsinki Digital 2020 hits the internet! Taking place entirely online, from Monday, September 14 to Friday, September 18, it’s the latest in our series of much-loved conferences for the games industry. And today we’re excited to reveal the next set of expert speakers and panellists.

Over 1,500 industry professionals from around the world will log onto their computers to do business, network with each other and learn from more than 250 of the world’s leading authorities in the games industry on a total of 21 themed conference tracks. We’re celebrating Finland in particular - it’s the time of year when we’re usually to be found swapping business cards in Helsinki - but make no mistake, it’s global and it’s online and it’s crammed with the best international developers, publishers, investors and toolmakers.

Each track will be streamed live, recorded and made available on demand, so with a ticket you can interact with our speakers during their talks through our Q&As or catch up at a later time if you’re unavailable for the stream.

Take a deep breath as we reveal the latest confirmed speakers. Who will you be learning from next month?

We’re delighted to announce that Unity Technologies’ GM deltaDNA Mark Robinson will be joining us online for Pocket Gamer Connects Helsinki Digital 2020, where he will be sharing his expertise in the live ops field.

Speaking of which, key talking points at our Pocket Gamer Connects conference remain investment and funding. Konvoy Ventures’ managing partner Jason Chapman features on a panel where he discusses what investors are looking for now, whereas HeyStephenHey’s Stephen Hey heads his own session looking at investment from a developers’ perspective.

Transcend Fund’s principal Graham Gockley looks at what are the next big acquisitions in the games industry and what is driving them with a panel of other experts. ChargeUp Games’ co-founder Adam Flanders and Jam City’s VP, user acquisition marketing Brian Sapp discuss with a panel on the ways you can use UA funding effectively. Meanwhile AudioMob’s founder and CEO Christian Facey features in the lineup with his session titled ‘Monetise, not Bastardise’.

Real Media Now’s co-founder and head of business development Dan Anahory, together with a panel, identifies the new generation of ad formats.

How can other media formats such as TV and films learn from the games industry? And vice versa? Do make sure to tune in for our new Beyond Games track. Rebellion’s talent acquisition manager Eamonn Vann-Harris and Behaviour Interactive’s head of business development, Europe Stefan Kreutzer discuss with a panel of other industry leaders.

Arcane Circus’ co-founder and lead artist Molly Heady-Carroll appears alongside Half Mermaid’s game director and owner Sam Barlow on a panel which focuses on drawing inspiration from outside games. Novelist, TV writer and comic creator Paul Cornell reveals the secrets of character creation, in this new track.

Playtra’s game director and founder Dan Bernardo discusses alternative storytelling in games, while also featuring on a panel which focuses on games as a cultural force. SpecialEffect’s founder and CEO Dr. Mick Donegan shows you how games are a force for good, and how the SpecialEffect charity is having a worldwide impact by working with the industry.

Esports Insider/Benzinga’s journalist Crystal Mills and Cherry Pick Talent’s founder and commercial director Brittany Bagnall discuss some of the new channels for influencers, while NCSOFT’s associate general counsel Yan Perng also appears on a panel where these experts will look at content moderation.

Meanwhile, remember it’s not just mobile that gets attention at our conferences: Niko Partners’ senior analyst, esports Alexander Champlin takes a dive into the PC and console market in Asia and its influence in the esports scene. Teravision Games’ CEO Enrique Fuentes joins us for a session on how they developed their high-energy VR title Neon Fury.

Tenjin’s platform director Matthaus Krzykowski shows how they were preparing their customers for the iOS 14 attribution switch, while Niantic’s network operations manager Foad Shahbazi looks at what 5G means for gaming.

Book now to save more than $300 before midnight tomorrow!

Want to hear and learn from these amazing speakers next month? Then book your tickets for Pocket Gamer Connects Helsinki Digital 2020 now! You can save more than $300 on your ticket with our Early Bird prices, but only if you book before midnight tomorrow!

Speak at the seventh Pocket Gamer Connects Helsinki this September