Revealed: the third set of speakers for the fourth online-only conference in the series, this November 9-13 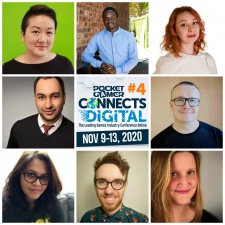 Pocket Gamer Connects Digital #4 is just three weeks away, and we’re excited to reveal the next set of expert speakers and companies who are taking part!

Going live on November 9th to 13th, the online conference features live streamed talks, panels and workshops offering the opportunity to interact with speakers and your fellow attendees. All sessions are recorded and made available on demand too, enabling you to catch up at a later point if you can’t quite make the stream.

And today we're excited to unveil more exciting speakers including Zynga, Mediatonic, EA, Raw Fury and more! Read on to find out exactly which leading industry experts are looking to share their expertise with you at Pocket Gamer Connects Digital #4.

We are excited to announce that Mediatonic’s senior game designer Chris Winn joins us for Pocket Gamer Connects Digital #4, hosting a superstar session on using innovative gameplay to delight players and maintain engagement.

Is narrative just for the indies? EA’s creative director Petri Ikonen and Red Stage Entertainment’s chairman of the board Marjaana Auranen discuss with a panel.

PeopleFun’s chief product and analytics officer Carol Miu analyses the evolution of Wordscapes from a product perspective, starting from a basic word game into what it is now.

Koch Media’s business developer Thomas Glenn compares the differences of working with a publisher and self-publishing, and discusses which you should pick. Akupara Games’ CEO and founder David Logan shows you how you can go about taking advantage of all available stores.

What is it like working with publishers from different cultures? LudiqueWorks’ CEO and co-founder Douglas Ogeto and Samer Abbas discuss with a panel, touching on sub topics such as contracts, what developers should expect, how negotiations go and the different styles.

Supremacy Games’ CEO and co-founder Jari Pauna and Raw Fury’s producer Liam O’Neill discuss how you can spot a bad publishing deal on a panel with other speakers. We’re also pleased to announce that Curve Digital’s chairman Stuart Dinsey joins us in November to host our publishing track to hear from our speakers and share his own thoughts with the industry.

The Afrogamer’s Ife Akintaju and Carry1st’s chief of staff and partnerships lead Sean Gotkin unite for a fireside chat which looks at the growth of Africa in 2020.

How big can the MENA market get? FRAG Games’ business director Zaair Hussain, Unbound Game Studio’s CEO Moeen Rezaei and YOOZOO Games’ head of YOOZOO Turkey and MENA’s Arslan Kiran discuss and look ahead to the next ten years.

Frameplay’s CEO Jonathon Troughton takes a look at the death of the IDFA and cookies. Meanwhile, LILA Games’ CEO Joseph Kim discusses how we can prepare for the end of the IDFA with a panel.

Gamejam’s co-founder and CEO Christian Calderon joins a panel with other experts to look at the advantages and challenges of working with licensed IPs.

The Game Design Studio’s general manager Pascal Luban features on a fireside chat which looks at the best practices of games user research.

Is esports becoming all about brands and prizes? EVL Interactive’s co-founder and partner Chris Chaney discusses with a panel how we can go about keeping esports about esports. Meanwhile, Isle of Man Government’s head of esports Chris Kissack discusses how to attract non-gamers to esports with a panel.

AppLovin’s manager, business development Tony Deane and Carry1st’s head of games Nick Murray discuss with a panel whether we have reached the end of innovation with hybrid monetisation. Phezos’ marketing manager Vedran Rutnik discusses some of the alternative ways to monetise your games with a panel.

Star Sable’s product owner Stacy Place and DECA Games’ head of business development Stephen Lee discuss whether live ops as a marketing opportunity and how with a panel.

Funday Factory’s product manager and partner Emil Kjaehr discusses how ads can be a tool for retention. Konvoy Ventures’ managing partner Jason Chapman delivers a session exploring where the next billion gamers will come from.

Alzehimer’s Research UK’s director of communications and brand Tim Parry features alongside The Children’s Society’s director of new ventures Kirsten Naude on a panel which looks at working with charities.

BFI’s head of certification Anna Mansi, One 3 Creative’s chief storyteller Houston Howard and TPub Comics’ founder and editor Neil Gibson look at the effects 2020 has had on creative media and arts.

Don’t miss out on this amazing opportunity to learn from the biggest names in the games industry. Book now and save more than $190 with our Mid-Term prices!

You can catch him on Twitter @Charlie_173 talking about anything gaming, TV or football related whilst also sharing too many memes.