The Huawei Developer Webinar will feature representatives from successful Chinese developers and partners, including Tencent, iDreamSky, Jinke and Feiyu 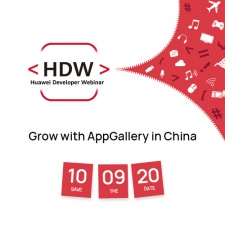 Breaking into China has always been difficult for mobile developers, but Huawei is trying to change that with a series of initiatives aimed at overcoming the traditional challenges that global developers face while trying to penetrate the lucrative Chinese market. These new support measures are set to be announced in full at the Huawei Developer Webinar (HDW) - Grow in China, Win with AppGallery, which will be livestreamed globally on November 9th at 1pm CET.

The potential in China is huge, and it’s little wonder that the country is widely considered to be the world’s first ‘mobile-first’ society. According to statistics from Business of Apps, it accounts for around half of global consumer spending on mobile apps, and last year app downloads in mainland China approached 100 billion, with gaming at the forefront of this exciting growth.

However, developers from overseas markets often struggle to capitalise on the opportunities that China presents due to numerous barriers and challenges. For example, it’s hard to navigate the wide range of local regulatory and compliance requirements, and developers often struggle to localise their app and make it relevant and marketable to Chinese users.

That's where Huawei's new initiatives come in. The company is looking to leverage its position as the owner of the largest smartphone market share in China to open doors for Western developers. The HDW on November 9th will focus on the various obstacles that developers need to navigate − from cultural considerations to the legal and qualification requirements in China.

The webinar will also see the launch of a white paper that delves into China's app marketplace. The paper will look at the rapid expansion of the app market, pinpointing areas of growth as well as focusing on possible hurdles that global developers need to understand, such as user acquisition. Alongside these details, the white paper will also reveal more information about the suite of tools that Huawei is launching to aid global developers in their attempts to make it big in China.

One of these is the HMS Core Localisation Service Solution. This will combine resources and information to ensure that developers are making apps that are going to be viewed as essential by Chinese smartphone users. Huawei will also release more info about a new IT Online Service Platform which will enable global developers to quickly find answers to questions about any protocol or compliance issues they might be facing.

Huawei's experience in the Chinese market is at the core of all of these initiatives. In the second quarter of 2020, the company had a 46 per cent share of the smartphone market in China, and its AppGallery app store ranks in the top three globally with 500 million monthly users across 170 countries by the end of September. Huawei's technology, services and products have shaped the modern Chinese smartphone user, and it's now looking to offer even more choice to Chinese consumers by designating more resources to helping global developers succeed.

The Huawei Developer Webinar – ‘Grow in China, Win with AppGallery’ will feature representatives from successful Chinese developers and partners, including Tencent, iDreamSky, Jinke and Feiyu. They'll share insight into Chinese consumer habits, as well as explain where the opportunities are in China, and how to get to grips with the challenges and difficulties the Chinese market presents to developers.

The webinar will also feature a Huawei legal expert who'll discuss the various legal, compliance and qualification requirements that global developers are going to have to understand and meet to release apps in China. They'll discuss copyright certification, business operating licences and publication approvals, giving developers a clear insight into the intricacies of the Chinese system.

Part of the focus of these new initiatives is to ensure that global developers are not just aware of the challenges facing them in China, but are able to overcome them as well. Huawei is looking to be the on-the-ground presence for global developers, using its expertise in the market to put new apps in the best possible position to succeed.

More details about the Huawei Developer Webinar - Grow in China, Win with AppGallery, as well as a registration form to sign up for the webinar, can be found by clicking on this link. The HDW will be streamed worldwide on November 9th from 1pm CET.