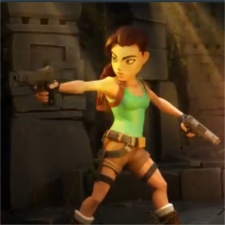 As revealed on Twitter (below), Tomb Raider Reloaded will be developed by Emerald City Games and the Square Enix London mobile team.

Not much has been given away in the brief 40-second trailer. However, it did feature a wolf, a giant spider, a stone golem and a T-rex, so it's just going to be another day at the office for the leading lady.

Check out this brand-new teaser trailer for Tomb Raider Reloaded, developed by our friends at Emerald City Games & the Square Enix London mobile team – coming to your mobile device in 2021! pic.twitter.com/I7ZLjMtpaq

Furthermore, since this is a Tomb Raider game, an artefact was featured in the trailer. Also, for any fans that were disappointed at not wielding Lara's signature dual pistols in the recent games trilogy, Croft showed them off in the 40-second clip.

Next year, it will mark Tomb Raider's 25th anniversary as Lara has been raiding tombs since her first release on PlayStation in 1996. Perhaps Tomb Raider Reloaded is the first step in what will be a big celebration for one of the most iconic characters in games history.