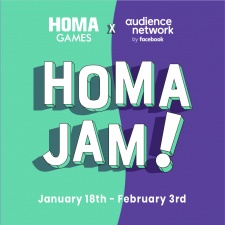 The HOMAJAM will begin on January 18th and is the latest event that Homa Games has held as it aims to support, diversify, and educate those that are in the hypercasual space.

Its previous game jam featured a staggering amount of participants as it hit 800. However, through its partnership with the Facebook Audience Network, it is hoped that HOMAJAM will exceed that number.

"We'll be sharing best practices in User Acquisition and Monetization for the hypercasual industry in order to leverage their games."

Moreover, the new competition will boast a higher prize pool at $165,000 in cash awards. Furthermore, there will be at least seven winners.

Time for a speech

However, this is not your average game jam as Homa Games have invited a range of experts to give talks as part of the event. Such speakers include Celia Hodent and Eric Benjamin Seufert.

"Game jams have been here since the beginning of game development, and we believe in its place in the hypercasual space," said Homa Games CRO and co-founder Olivier Le Bas.

Every game jam we've hosted had an incredible spirit of creativity, learning, challenge and support. To further strengthen this movement, we invited top experts of the industry to share their knowledge with every participant of HOMAJAM."

For more information on the game jam, or to register, developers can visit Homa's website.