The Fortnite influencer hit the milestone this week 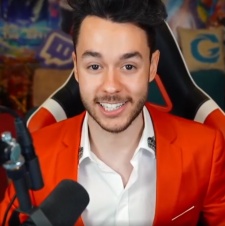 The streamer, known for his Fortnite content across YouTube and Twitch, just received his own in-game Icon series skin. Martínez hosted a livestream in order to unveil the new skin.

Martínez has been streaming on Twitch since October 2019, and has amassed over 6.3m followers. He brought a large proportion of his fanbase from his YouTube channel of the same name, which has over 16m subscribers.

Blevins also previously held the record for most concurrent viewers in a Twitch stream, following a Fortnite livestream with rapper Drake in 2018. Martínez also came close to breaking the record just last month.

Martínez' new record stands leagues above any other high concurrent viewer streams across both Twitch and YouTube. The record for most concurrent viewers in a stream on YouTube belongs to another Spanish creator, elrubiusOMG. The comparison can be seen in this handy chart made by industry analyst Rod 'Slasher' Breslau.

put together the top Twitch and YouTube streams all time, provided by @StreamHatchet

Twitch to be more transparent with its safety efforts