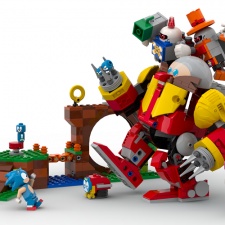 LEGO has announced a partnership with Sega that will see Sonic the Hedgehog receive his own official LEGO set.

The idea came about after UK-based LEGO "superfan" Viv Grannell submitted the concept to LEGO Ideas, featuring the likes of Sonic, Doctor Robotnik (Eggman) and Green Hill Zone, based on 2017's Sonic Mania version of the level.

The design was then approved after earning 10,000 votes from fans worldwide. It will now go into the product development phase, where its design will be finalised by both product owners.

This is not the first time Sonic has crossed over with LEGO, as the Blue Blur previously featured in LEGO Dimensions back in November 2016, with his own Level Pack.

“I’ve been invested in the world of Sonic for almost my entire life, and it’s such a perfect fit for the LEGO system that I spent about a year rallying support for it to happen," said Grannell.

"Having 10,000 people back my design was overwhelming enough, even with friends and family behind me, but having it be selected for further development was the most exciting secret I have ever had to keep!”

No details of pricing or a release date were shared, yet it's likely more will be revealed later this year when Sonic celebrates his 30th anniversary in June. For comparison, the Mario Starter Course was priced at $59.99.

Meanwhile, the sequel to the Sonic the Hedgehog movie has been confirmed to enter production in March with a release date set for April 8th, 2022.