From editorial to events, women are leading the way 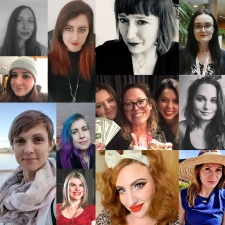 While we're all about celebrating women across the games industry this week, there are some other people closer to home that we'd like to shine a spotlight on. The heroines of Steel Media.

We don't often get a chance to highlight the work that happens across Steel Media, from the editorial side, over to events management and sales. Each team is staffed by incredible women, and we wanted to take a moment to spotlight their work, their roles and some of the struggles they've faced in this wonderful yet turbulent industry of ours.

Steel Media's editorial team features a strong trio of writers. Danielle (that's me!) sits on the editorial throne at PocketGamer.biz, while Kayleigh tirelessly leads the daily news grind. Charléne is lead contributor over on the French version of our consumer sister site, PocketGamer.com.

"Since I was a little kid, I've been a huge gamer, from the time I opened my Sega Mega Drive to getting my hands on a PS5. Games have helped me through some tough times over the years, so it felt like a natural step to get involved," Kayleigh said, regarding her role.

"Unfortunately, several times I have been told my voice is not relevant and that I have no idea what I'm talking about. It can also be a struggle to be heard. Honestly, it is some of the people that I work with that help me to keep going when I struggle."

Sally, Katy and Katherine are Steel's events management triple threat. They are working constantly behind the scenes, making sure our massive five-day conferences are running seamlessly. This responsibility took a turn this year; the pandemic saw our events pivot from the very familiar world of setting up stages and securing party venues to juggling Zoom calls and creating Discord bots. Needless to say, they handled it incredibly, and our series of PGC Digital events is growing stronger with every event.

"The games industry has always allowed me to be me," Sally added on her job in games.

"I always feel like I am a bit of an outsider as I don't play games, but run events for the games industry. But the majority of people have made me feel welcome and as much a part of the industry as I could ever be.

"Working as a woman in events in a man's world can be tricky. You always get one or two people that push the boundaries, but I am a very strong woman and can put everyone in their place when needed!"

Our sales and biz dev team is also staffed up with talented women. Lisa is our VP of business development, wrangling deals for our b2b brands. Andreea is head of B2C sales, working across our consumer brands. Ana is our business development manager over on B2C, while Alina serves as media exec on the B2C team.

"I first joined the games industry back in 2003 during my three year stint working as biz dev for Babel Media (now Keywords Studios)," Lisa said, regarding her start in games.

"I was initially responsible for selling games QA and localisation services, but within months of starting I opted to help build out sales for the mobile games sales team, it was just me to start with as the sales team believed that mobile games were a fad - lucky for me that within a year we had a million-dollar mobile testing business and I had found my industry calling.

"Industry events back in the noughties were rife with booth-babes and/or female strippers hired as ‘entertainment’ at after-parties, I was regularly invited to client dinners which ended up with the ‘guys’ going to strip clubs and me being in a position where I felt I had to go along in order to maintain face and keep client relationships moving in the right direction.

"Thankfully, times have changed and I’m incredibly happy and (honestly) relieved that the demographic now attending industry events has evolved to the point where women are making up a much larger minority and booth-babes et al are (almost) a thing of the past."

Patty is our main speaker wrangler; any guest you've heard at a PG Connects was likely secured by her. Poppy is another biz dev guru working with our PG Connects marketing team. Sasha runs our Investor Connector event, linking developers with investors across the globe.

"I started working in games because of an idea I had to connect music fans. The game went horribly wrong, but I learnt a lot about game development and fell in love with the community and the creative people involved," Patty said.

"Since then, I have always been supporting game developers in one capacity or another, and am trying to bring value to game business. It is an amazing environment to be part of. I think most people don't realise yet the power that games can hold in society.

"I have never experienced struggles for being a woman in the game space, although I have heard of it from other people. As I have been part of the creative business for such a long time, I learnt from the start the best ways to deal with all kinds of situations."

Gaming is and always has been a fundamental aspect of my life. It gave me a safe place to explore my identity, socialise with others, and experience other cultures, environments, and ways to live. It also gave me both a hobby, and as such became something I am so passionate about," Sophia said.

"Being a woman and at the same time LGBTQ, whilst travelling the world, can mean that sometimes you have to be careful in certain situations, and also that there are certain opportunities that may not be as open to you. Furthermore, I think you do approach certain situations more cautiously to others. Of course, I have experienced both of these situations.

"However, focusing on the positives, when it comes to my experiences within the industry, I am just continually amazed and surprised by all of the support I have been given, and am continued to be provided with by all of the people I work with. Of course, this doesn’t eliminate many of the problems I and others face, and there is always work to be done to ensure equality in the gaming industry."

Diversity is centred at the heart of our PG Connects events too; having a diverse range of speakers, including women, is incredibly important to the entire team, and everyone works tirelessly to make sure people of all backgrounds are represented and championed.

"Steel Media have always looked to hire the best candidates for the company regardless of gender, race or global location. I genuinely couldn't be prouder to have such a strong female contingent in senior roles across the business, as well as many more talented women, breaking through," Steel Media CEO Chris James added.

"What's more, I believe it is essential that the games industry as a whole continues its efforts to empower and support developers, designers, creators, marketeers and more that reflect the incredible diversity of its audience."

PG.biz is also running a series of interviews all this week to celebrate International Women's Day, where we'll be spotlighting some of the industry's finest talent. Check it out here.

Are you one of the world's best game creators?

Speaker Spotlight: get up to speed on mobile ads at PGC Helsinki with AdInMo CEO Kristan Rivers