Adventures With Luigi Starter Course will retail for $59.99 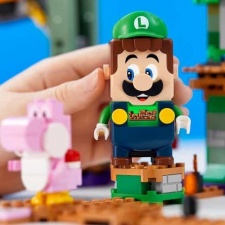 Nintendo's LEGO Super Mario collection has gotten a new addition in the form of Luigi.

As confirmed via Twitter, Mario's younger sibling will be receiving his own starter course.

Pink Yoshi will also feature as part of the set, as will Super Mario Bros. series' villain Boom Boom.

The Adventures With Luigi Starter Course will retail for $59.99.

LEGO and Nintendo fans can already pre-order the Luigi set, with the item set to be released on August 1st, 2021.

The Japanese games giant first formed a partnership with LEGO last year, when the pair teamed up for the interactive Super Mario set.

Last month, LEGO confirmed that the Mario collection was one of its "most successful theme launches."