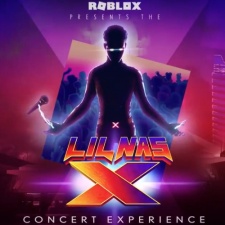 Roblox looks to not only replicate reality but - as part of the metaverse - improve upon it.

The topic was discussed at length as part of a Fireside Chat at the first Beyond Games conference with Roblox senior director of product Morgan Tucker talking to Steel Media COO Dave Bradley about'Building Immersive Virtual Worlds for the Metaverse'.

A big part of the talk surrounding the digital concert by US rapper Lil Nas X in December 2020 within Roblox.

The performance achieved more than 33 million views (via The Verge) across its two-day performance where players globally could jump in to see performances of Old Town Road among other hits.

"Most of our players are engaging online with their friends so we were really trying to think about how can we take that to the next level and think about a large-scale experience that brings people together. The concert was a really natural starting point," explained Tucker

"With the metaverse, we don't have to just replicate reality we can actually improve upon it, make it more efficient [and] more impactful in certain ways."

Lil Nas X performed motion capture with his dance crew to make the show feel authentic as it could be, with the stages all receiving interactivity elements that the audience would engage with.

"It wasn't enough to just put [Lil] Nas on stage and have the audience sitting there," said Tucker.

"We wanted to wrap them up in the story… on the first stage where he's performing his biggest hits, such as Old Town Road, we have interactive elements like tornadoes and things like that… that adds kinetic energy to the viewing of what's going on. You feel like you're in it"

One of the technical challenges the studio faced was how many people could be in one section in one instance, with 50 people per instance settled on because of the interactivity.