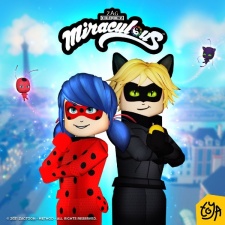 It's claimed to be the first game based on a TV series to be developed for the platform.

Based on the animated series that boasts more than 20 billion views on YouTube alone, the title attracted an average of 1.2 million players during its launch week, which is around three per cent of Roblox's global daily active user base.

Zag Games’ first mobile game for Miraculous - Tales of Ladybug & Cat Noir was released back in April 2018 and has generated over 150 million downloads to date.

A second mobile game Miraculous Ladybug Puzzle RPG is currently in development with CrazyLabs and set to launch alongside the holiday 2021 premiere of the Ladybug and Cat Noir: Awakening animated movie.

Miraculous RP: Quests of Ladybug & Cat Noir is a role-playing game where players can recreate their favourite moments, hang out with friends, explore the city, play mini-games and create their own 'Miraculous' superhero.

The game was developed by Israeli studio Toya based on Zag's Miraculous - Tales of Ladybug & Cat Noir IP.

Set in Paris, Miraculous is the story of two seemingly typical teens - Marinette and Adrien - who have secret identities and magically transform into superheroes, Ladybug and Cat Noir to fight crime. Miraculous has generated more than 23 billion views on YouTube.

"We are humbled by how the game has been received by the community on Roblox and how players are using their voices to promote it across many platforms," said Toya Studios CEO Anat Shperling.

"This resonance represents tremendous validation for Toya’s mission and approach to creating on the platform - with inclusivity and a commitment to developing strong and diverse characters that serve as role models for girls, boys, and young adults to play with."

"When the fans discovered the beta release, they quickly started playing and we are thrilled that our first game on Roblox has been so widely and quickly embraced."

Back in March, it was estimated Roblox had generated more than $2.5 billion from its mobile players.

PGC Digital: How listening to your audience can increase user acquisition