"We are sure that the results will turn heads..." 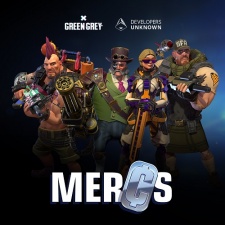 Mercs (or Mercs 2049 as it was formerly known) is a team-based player versus player (PVP) third-person shooter currently in development, with engagement and monetisation features set to be added soon. The game will enter a global soft launch for iOS and Android devices in early 2022, with a full launch expected to follow in the spring of that year.

Located in Moscow, Developers Unknown is headed up by producer and game developer Renat Nezametdinov, who has previously worked Corsairs: Conquest at Sea as well as the 2003 Pirates of the Caribbean game based on the film.

"After the technical testing of the game, we received quite a few offers of cooperation from both large domestic and foreign companies," said Nezametdinov.

"However, Green Grey is interested not only in the economic potential of our project but also in the prospects for its further development. For them, we are not just another product in the pipeline, and this is very inspiring."

Green Grey CEO Dima Morozov added: "Developers Unknown is an awesome team of 70 people headed by Renat Nezametdinov and Nikolay Piskunov, who know how to bring major projects to fruition.

"Our cooperation is not only about funding, it's also about the collaboration of the two strongest teams in the game today. We are sure that the results will turn heads and win the hearts of gamers."

Green Grey was most recently involved in Pocket Gamer’s Investor Connector event. The next PGC Digital event is scheduled to take place from July 12th to 16th, 2021.

Turkish startup Dream Games recently closed a $155 million Series B funding round that valued the company at $1 billion.