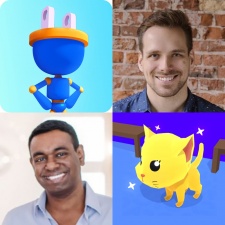 Formed in Hamburg one and a half years ago, Sunday Games is a relatively new player in the hypercasual market. Despite its youth, the studio has already been behind massively popular hypercasual games Cat Escape and Plug Head.

The first game published by the studio, Cat Escape, was an instant hit and has seen increasing profits month-on-month since its debut eight months ago.

Thangaraj Vijayan detailed how not every game will be accepted right off the bat. After being rejected from previous publishers for having too high of a CPI, Plug Head had to be revised to test the marketability of the game before it could be released. One of the key areas of focus was increasing the game’s retention to highlight that it will be profitable in the long run and analysing its marketability in different networks.

Sachsenhausen described how there are three phases in the lifecycle of a hypercasual mobile game. The first phase involves scaling up the game to get good traction from audiences from marketing and user acquisition campaigns and investing in the collection of data. Sachsenhausen says that profits in this stage are "an absolute negative but you will need to equalise in the rest of the life cycle."

Phase two involves “throttling down” and deciding which campaigns worked well and which did not. Traffic to the game will be greater by this point and you can cease overspending in this area.

The final phase in a hypercasual game’s lifecycle is when the game has reached sustainable profits, something that Sachsenhausen says can vary in length.

"If it took 10 adverts to get a person into the game, then during the time they play the game they need to be shown 20 adverts whilst in-game," explained Sachsenhausen while trying to simplify this stage.

"It depends on the game, everyone is different as some fizzle out after a couple of months and some last a few years," says Sachsenhausen regarding the average lifecycle length of a hypercasual game.

"Games that follow social media trends are often more short-lived as the attention is focused on a different trend altogether."