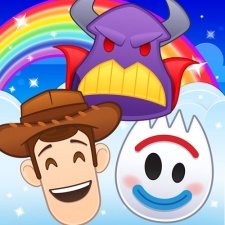 The impressive feat has been reached just in time for the celebration of its fifth anniversary.

Disney Emoji Blitz is Jam City’s spin on the match-three mobile game archetype that has remained popular since its inception. The game will often have events that coincide with the release of new Disney titles, along with seasonal events that match Disney film settings.

The game is one of several partnerships between Disney and Jam City, including Disney Pop Town, Frozen Adventures and Book of Life: Sugar Smash

The creators of Disney Emoji Blitz are holding a virtual celebration today from 19:00 to 22:00 (UK time) that is limited to the first 1000 participants. The celebration will showcase upcoming events in-game and a live Q&A with developers.

"On this special fifth anniversary, we are proud to celebrate the successes and milestones that Disney Emoji Blitz and its development teams have achieved," said Jam City senior vice president of studio operations Lisa Anderson.

"The game uniquely enables Disney fans to interact with one of the most extensive Disney catalogues available.

"Whether it’s new emojis from upcoming films, or content representing fan-favourite films, shows and parks, Jam City is committed to making Disney Emoji Blitz one of the most comprehensive and easily accessible ways for fans to connect with Disney franchises and IP every day."

For the game’s fourth anniversary we spoke with Jam City’s product marketing manager Christie Genochio on how retention is the key to success.