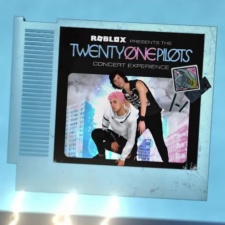 Roblox has partnered with US indie rock duo Twenty One Pilots to host an interactive virtual concert via the online game platform.

The upcoming virtual concert, known as The Twenty One Pilots Concert Experience, is the company’s most recent reach for the coveted metaverse via non-gaming elements, following last month’s album launch party for UK rapper KSI.

The duo, consisting of Tyler Joseph and Josh Dun, will perform songs from their newest full-length album, Scaled and Icy, which debuted at no.1 on Billboard’s Top Rock Albums.

For the first time ever, the setlist for the concert will be decided by fans in real-time through a voting system. The setlist will consist of previous hit songs as well as songs from the new album and each song performed will feature its own individually designed set.

Roblox has added more than 30 pieces of in-game virtual merchandise, along with new emotes and interactive features for the virtual concert.

The concert upholds a deal struck between Roblox and Sony Music earlier this year that will bring more musical artists into the gaming platform.

An increase of users, rising quarterly revenues and growth in the over 13 age group are a few of the contributing factors that earned Roblox a solid ninth place on PocketGamer.biz’s Top 50 Mobile Game Makers 2021.

Chipotle is the first restaurant brand to open in Roblox