The event will be online and streamed on multiple platforms 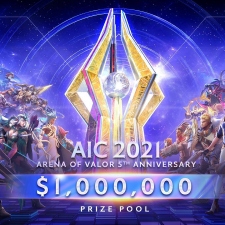 An unprecedented $1,000,000 is at stake for teams clashing at the Arena of Valor International Championship (AIC) 2021 between 27 November and 19 December.

This 5th anniversary of the AIC doubles the previous prize pool. AIC 2021 plans to host one of the biggest battles in Arena of Valor history.

It will be fully online to ensure fans are able to safely enjoy this MOBA esports tournament, with an ‘immersive virtual concept and digital broadcast format’.

The AIC is eagerly anticipated by fans around the world who will be able to watch the entire event live. Matches are to be streamed on multiple platforms and the commentary will be in various languages.

Given the quantity of strong competing teams growing over the years, battles are promised to now be fiercer than ever. 14 teams across eight regions (including China, Japan, Thailand and others) will compete.

Arena of Valor is developed by TiMi Studio Group, a global video game development team headquartered in Shenzhen. It is a subsidiary of Tencent.

Honor of Kings skips past $4 billion in lifetime revenue