Five horror games to get you in the Halloween spirit

Get spooky this weekend with these horror game recommendations! 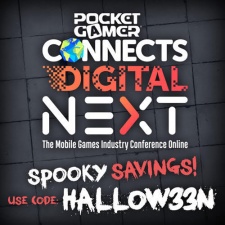 What spooky games are we playing this year? As the season of the witch is upon us, homes are adorned with spooky decor and sweets sales skyrocket. We’re all gearing up for a spooky night come October 31st. Game enthusiasts are no different. We’re getting ready for a night filled with ghouls and thrills -- in horror games, that is.

Horror gaming experiences serve to not only entertain you in the moment and take you away from the mundane, but are also a wonderful way to get in the Halloween spirit. For those of us who are too old to go trick-or-treating and too young to take someone else trick-or-treating, there is nothing quite like a night in playing a great horror game. For those of you wanting to know what’s next in games, consider attending the most highly anticipated virtual conference for the mobile games industry, Pocket Gamer Connects Digital NEXT. Read on to bag yourself a 33% flash sale discount code!

In celebration of Halloween, we asked the PG Connects team about their favourite horror games across all platforms. These are some great options for you to consider if you are looking for some in-game frights this Halloween or, for you thrill-seeking gamers, any other time of the year as well.

Book your ticket to PG Connects Digital NEXT

Be sure to check out our flash sale here and use the discount code HALLOW33N at checkout to take advantage of a fantastic 33% discount for the upcoming virtual conference. Be quick though, this offer ends as the clock strikes midnight on October 31st.

How are NFTs affecting the future of gaming? Learn this and more at Pocket Gamer Connects Seattle

Speaker Spotlight: Mohawk Games’ CEO Leyla Johnson on the secret behind the popularity of hypercasual games

Speaker Spotlight: HipHopGamer AKA Gerard Williams on the significance of impacting others through your platform