The ‘Most Determined Stuntman’ returns 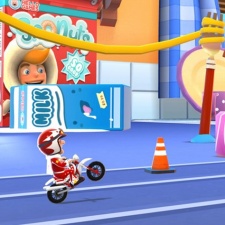 Sean Murray is the managing director of Hello Games, best known for the Joe Danger series and No Man's Sky.

Hello Games has relaunched Joe Danger on the App Store, inspired by a fan letter.

A letter from the parent of an autistic child has been highlighted as inspiration for the remaster, as the young boy was an avid fan of the stuntman and was no longer able to play as him.

Murray continued: "It blows my mind that something you make can be someone's first game they played, hit at an important time or even be their favourite thing for a while."

He also shared the parent’s letter, which noted that "children with autism deal with a great many struggles, chief among them are great difficulty with social interactions" and that the original Joe Danger enabled "fun with friends and family".

Joe Danger's relaunch sees the game brought back with a higher frame rate and updated graphics compared to the original, as well as ProMotion and Gamepad support.

Sean Murray added that bringing Joe Danger back has been a "hobby project" with years of rebuilding through many technological changes. Players who own the original will be able to update and download the remaster for free.

East Side Games Group recently revealed that it is developing a free-to-play mobile title based on the Doctor Who series, as well as a multi-year partnership with BBC Studios.