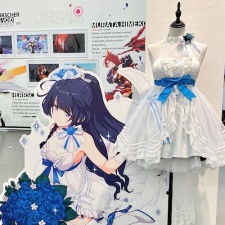 To celebrate the fourth anniversary of the launching of its global server for Honkai Impact 3rd, developer miHoYo (now Hoyoverse) is hosting a worldwide exhibition featuring artwork from the game.

Coming to multiple cities across the world, the free exhibition will kick off in Berlin, Germany, and will last from March 11 to March 20. After Germany, the exhibition will visit New York (March 25 to April 3) and São Paulo (April 29 to May 8), among others.

The exhibition will showcase over 300 exclusive official artworks from the RPG, including CGs, illustrations, promotional arts, and merchandise.

Furthermore, the artworks will be divided into several themed sections, such as the 'Hyperion Sets Sail!' and 'Merchandise Exhibition' sections that will feature "life-size" Valkyries (in-game characters) to give visitors a close-up of the character design.

Honkai Impact 3rd’s successor, Genshin Impact, built upon the gameplay framework of its predecessor and quickly grew to be one of the highest grossing mobile games since its launch in September 2020.

The studio is currently working on its next project in the Honkai universe, Honkai Star Rail, which will feature similar gameplay to its predecessors but will be set in a futuristic, sci-fi, space setting. The game is currently in soft launch and has conducted multiple closed beta tests.