The Canadian games market is booming -- see how you can get involved this July 6-7!

Don’t miss out on your chance to get ahead of the curve in two weeks at Pocket Gamer Connects Toronto, July 6-7 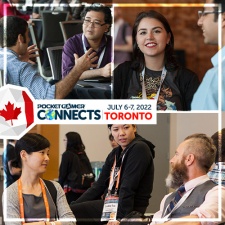 For the first time ever, we are bringing Europe’s leading b2b mobile gaming conference to the bustling, vibrant and diverse city of Toronto in Ontario, Canada on July 6 to 7. The industry-backed Connects conference experience is coming to a dynamic new city, and a dynamic new city affords our conference attendees uncharted new opportunities to expand their network and get to know this innovative urban hub.

The Connects conference series is renowned all around the world for endless chances to expand your network across the globe, innovative insights, future-gazing conversations and opportunities to take any business to the next level with unmissable matchmaking available too. We can’t wait to explore the wide array of opportunities that this contemporary city offers with all our attendees in just over two weeks!

Toronto is an inspiring city and location for our next event, and just in case you’re not too familiar with it, we’ve done the research so you can get caught up on everything going on in the Toronto gaming scene and Canada in general. Keep on reading to find out more!

If you’re ready to secure your spot at Pocket Gamer Connects Toronto, head over to our website now, you can save up to $220 CAD on your ticket if you book before our Mid-Term offer ends!

The Canadian market is growing

The city of Toronto has already made a name for itself in the global gaming sphere, and it’s in its early days. Just last year, UKIE/Newzoo reported that the Canadian market is already in the top ten global video game markets. It’s ranked 8th in the entire world just behind the UK and France with a market value of 3.84 billion USD and 21 million users currently. The country is expected to follow a 9.17% growth rate over the next few years.

Canada is the 8th top video game market in the entire world.

Toronto’s motto is that diversity is their strength, and the city continues this mission statement in the gaming sphere. The largest video games segment in Toronto is mobile gaming, with a market volume of $746 million in 2022 – it’s leading the way in the global mobile gaming sector as well as already being renowned for its incredible eSports scene.

The city’s a major hub for eSports, with one of the biggest Toronto eSports organisations investing $500 million into creating an eSports entertainment venue in the heart of Toronto. It’s expected to be up and running within four years time, and if this investment tells us anything, it’s that the presence of Toronto as a major eSports and gaming powerhouse is just getting started.

All in all, the time to get in on the Toronto and Canadian gaming scene as a whole is now. It’s a prime place to do business in games in 2022, and whether you’re looking to explore growing mobile gaming markets or the future of eSports, making connections in Canada is of essence.

Up-and-coming capital of esports
Canada is known as one of the top global esports centres, and as of recent years, it’s been rising up in the ranks. In 2017, Team Canada scored second place in the Overwatch World Cup. In 2018, Canadian Sasha “Scarlett” Hostyn became the first woman to win a major StarCraft 2 Championship. Beyond the legends that they have on their teams, Canada is also home to leading global eSports organisations such as OverActive Media and Luminosity Gaming.

The top Canadian cities paving the way for eSports are Vancouver and our new PG Connects location, Toronto. Both the top global esports organisations are based in Toronto, making it one of the most up-and-coming esports cities in the world. Some of the most played eSports in Canada include Counter-Strike, Starcraft II, Rocket League, Dota II and League of Legends.

There is no place quite like Toronto to connect with other eSports enthusiasts, and one of our topic tracks is entirely dedicated to the topic. Stay tuned to find out more about the fantastic local speakers we have leading the conversation around eSports at Pocket Gamer Connects Toronto!

Network with Canadian powerhouses
Toronto is a city of excellence with a number of incredible forward-thinking games studios based there, and indeed across the other regions of Canada, and you could have the opportunity to connect with a good number of these companies this July, including:

[Canada] is expected to follow a 9.17% growth rate over the next few years.

Toronto is a brand new city for PG Connects with all-new opportunities, but your ticket secures you access to the same high-value conference experience you know and love. Don’t miss out on this opportunity to attend our very first conference in the city and take advantage of this incredible ticket discount!

Learn everything you need to know to protect your games from security experts at Pocket Gamer Connects Toronto!