The wargaming behemoth will reveal its upcoming slate of mobile releases at 18:00 BST today (June 1) in a co-production with PocketGamer.com 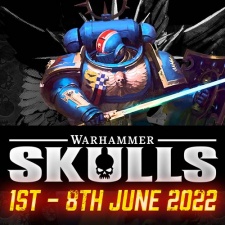 Celebrating its mobile lineup, the Warhammer Skulls Mobile Showcase 2022 has been co-produced by PocketGamer.com, and will feature video editor James Gilmour on hosting duties as he walks you through updates, trailers, interviews, and exclusive first looks of Games Workshop's suite of upcoming releases.

You can see the upcoming broadcast on the Pocket Gamer YouTube channel, at PocketGamer.com, or directly below.

The VOD will be available immediately after the broadcast at 18:00 BST.

The Warhammer Skulls event will continue through June 1-8 2022, and be sure to check out PocketGamer.com, where you will find in-depth articles exploring each title revealed and detailed in the Showcase following the event.

Games Workshop has long cast its eye on the mobile market, and partnered with Nexon in December 2021 to bring its flagship fantasy franchise, Age of Sigmar, to mobile with an upcoming "socially interactive" player-versus-environment title.