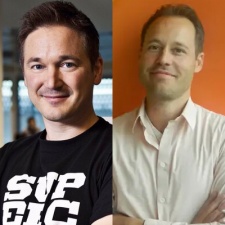 In a fireside chat with Index Ventures’ Stephane Kurgan, Supercell CEO Ilkka Paananen and King CEO Sebastian Knutsson discussed the histories of their respective games and companies, discussing their respective successes and failures.

Beginning the chat, which was a part of the Index Gaming Summit, Kurgan praised the success of both King’s Candy Crush and Supercell’s Clash of Clans, crediting them with making mobile “the most important gaming platform".

“They’ve defined the era and hopefully the next era as well, like Mario and Castle Wolfenstein and Warcraft before,” says Kurgan.

Both companies took advantage of the mobile gaming landscape, albeit with different approaches – and different results.

King developed two versions of Candy Crush Saga, which had already found success on Facebook, for mobile audiences. The iOS version initially saw low returns, which Knutsson attributed to a lack of support from Apple: “Everybody said you had to rely on Apple promoting your game, it was the only way to grow in the market.” An Android version, developed in secret, was released three days later with paid marketing.

The ability for people to play across platforms helped the company to scale and by 2013, 32 per cent of all mobile ads globally were for Candy Crush Saga.

That sort of passion is fundamental

Supercell had an easier path to success with iOS, with both Hay Day and Clash of Clans in US’s top 10 grossing games on the platform, with the latter reaching number one. Seeing their game as unfinished, the company kept them exclusive to iOS while it focused on improving the experience before porting first Clash of Clans and then other titles to Android, quickly repeating their success on the new platform.

Paananen attributes part of the longevity of Clash of Clans to the fanbase, discussing the criticism the company has occasionally received from players after an ill-regarded update. “That sort of passion is fundamental. Our kind of nightmare is you put a new update out and there’s no reaction.”

When asked about what companies could do to emulate Supercell’s success, Paananen stressed the importance of building a strong culture, encouraging people to “write down the culture and define the values in a pretty detailed way”. He stated that the company culture is something everyone is responsible for, and should be revisited periodically.

Paananen agreed with talent and culture as a good place to start, and also stressed the importance of allowing staff to operate independently, taking accountability for their own actions: “Don’t try to top manage too much. Bring in the talent and dare to let go.”

When asked what he’d do differently, Paananen stated that going public in 2014 hampered the company culture and how King operated. “When you know what’s working, you have to work pretty hard to protect it,” he stated.

Last month, King acquired AI software company Peltarion while Supercell has been extremely prolific with its investment support in a variety of angles, including its first NFT initiative and PC-exclusive studio, in addition to successful smaller mobile studios.

Five years on, have the first billionaire F2P mobile games survived or thrived?