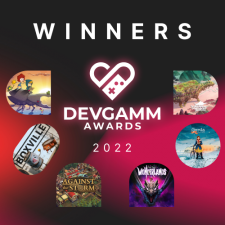 The winner of the Grand Prize is The Wandering Village by Stray Fawn Studio.

22 games from 17 countries were nominated in 8 categories. The nominees were announced by amazing industry experts:

The winners will split the $20,000 prize fund brought by Xsolla and tinyBuild – Awards Platinum Sponsors.

Against the Storm by Eremite Games

Gerda: A Flame in Winter by PortaPlay GP

The winners of Special Nominations:

Romancelvania by The Deep End Games