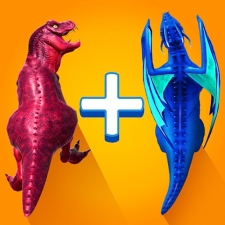 Homa has announced on their official LinkedIn that their hypercasual title, Merge Master: Dinosaur Monster, has accrued over 100m lifetime downloads. The game, based on the popular ‘merging’ concept is one of numerous titles that Homa has released, this time in collaboration with developer Fusee. The game was previously #1 in the US app store for March 2022.

Merge games allow players to combine elements found, or earned within the game to create new unique elements with powers that exceed the sum of their parts. And when multiple players get together to merge their finest, hard-won assets, the results can be game-changer for everyone who's in on the deal.

Homa styles itself as a platform for growing and publishing video games, with particular focus on the hypercasual market. Founded in 2018 it’s been slowly expanding over the years and has recently undergone a major rebrand, simplifying from their previous life as Homa Games. With some reports earlier in the year indicating that Merge Master was already a big hit in terms of downloads it’s now no surprise that this success has been confirmed by Homa themselves.

Ever since Homa’s rebrand it has been seeking to cast itself as not just a developer or publisher but also as a growth accelerator for the studios it works with. The company has been pushing further into new technologies, such as offering NFT collectibles of its mascot. Even on the LinkedIn post announcing their they emphasise, “By combining #data and expertise to superpower creativity, we’re making better #games possible and more hits probable.”

Much of Homa’s success can be attributed to it capitalising on the success of its hypercasual catalogue, of which Merge Master is a key example. The company’s acquisitions and indeed its business model is based around creating games in a matter of weeks not months and immediately pushing them to an audience hungry for new and varied hypercasual games. Judging by these latest figures it’s a tactic that continues to pay off.

However, hypercasual isn't proving quite so sustainably hot everywhere. In Japan for example although hypercasual makes up a significant portion of downloads it rarely holds onto players for long, with only 1% of playtime spend on games in the category.