But rival show claims it's dead in the water for 2009 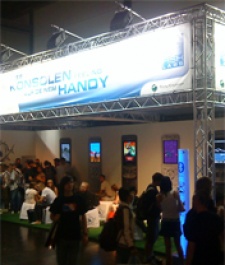 August 29th, 2008 - 12:44pm
By Stuart Dredge, Contributing Editor
This year's Games Convention was a mixed one in terms of mobile.

There were precious few mobile games being shown on the floor, but attendance from mobile publishers and developers was good, with plenty of networking being done away from the console and PC-focused halls.

German firm Fishlabs is certainly pleased with the show: it says more than 10,000 visitors to its stand downloaded free games via the company's Bluetooth marketing promotion at the event.

"Visitors practically attacked our booth!" says CEO Michael Schade. "We are convinced that we have won over many new gamers."

However, it's anyone's guess how successful the show will be next year, given the war of words that's breaking out between its organisers, and the company behind the rival Gamescom show, which takes place in Cologne next year.

The latter will be backed by German games publisher association BIU, and Gamecom organiser Koelnmesse has already released a statement slamming the Games Convention's chances for 2009.

"The lead trade fair will take place in Cologne in 2009 and beyond," says MD Oliver Kuhrt. "We have met with broad approval, and the industry is looking forward to gathering in Cologne. Whatever happens in Germany in 2009 outside of Cologne cannot claim to represent this sector."

Let's hope Koelnmesse spends less time rubbishing the opposition in the coming months, and more time thinking about how to better integrate mobile gaming into the main show.