BlackBerry getting its own Application Center 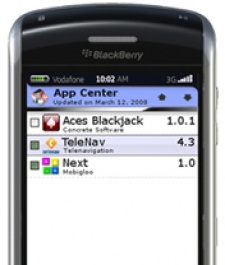 October 7th, 2008 - 11:15am
By Stuart Dredge, Contributing Editor
Application stores are the hot new thing this year. Okay, so they've been around for years, but the App Store and Android Market have bumped up the hype around open mobile application stores.

Now Research In Motion wants in on the action, seemingly with something called the BlackBerry Application Center. Screenshots and details have been leaked by the Crackberry website.

It's apparently due to launch initially for the BlackBerry Storm handset, but doesn't sound quite as open as its iPhone and Android equivalents.

For starters, mobile operators will apparently be in charge of what applications get sold through devices on their networks. It'll be an application on the device itself, rather than an App Store-like PC experience.

Although interesting news for publishers releasing BlackBerry games, the fact that the Application Center is seemingly for one phone only for the near future may pen back its appeal. Although the same is true of Android Market.