Is the Nokia N96 slower than the N95 for games? 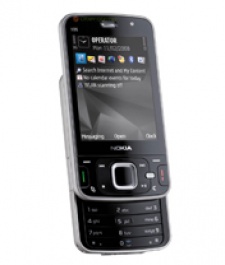 October 20th, 2008 - 04:35pm
By Stuart Dredge, Contributing Editor
Data from the FPC Bench project claims that Nokia's new N96 handset is more than half as slow as its predecessor the N95 in some aspects of game performance.

Davide Perini, who developed the FPC Bench software, got in touch to tell us about his results, which were produced when he ran a 3D benchmarking test on the two handsets.

Here's the graph from his low-level test: 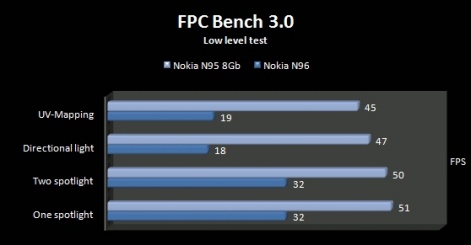 And here's the graph from his HD test: 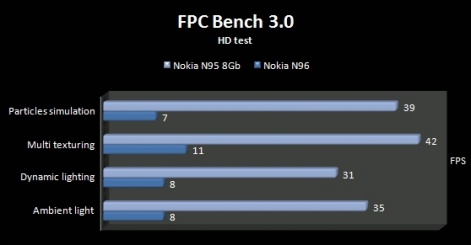 Perini says the tests show that the N95 is much faster than the N96 when it comes to rich 3D games, with the latter having a smaller CPU and no graphics hardware accelerator.

Figures from the JBenchmark site seem to back these results up (N95 here and N96 here).

However, some developers we talked to weren't so sure that this is a major issue. "It's hardly a story, since presumably the N96 is also far cheaper, and therefore mass-market," one developer told us.

"In Java terms, then obviously the experience you're going to get gaming-wise is going to be worse on a N96, but I'm not sure how many people really care about that. In N-Gage terms, the N96 will be around the same sort of performance of many of the other N-Gage handsets."

Is it an issue that the N96 has backtracked in terms of its Java performance from a handset released last year? Let us know your thoughts by posting a comment.