Will we soon be making our own iPhone shooters? 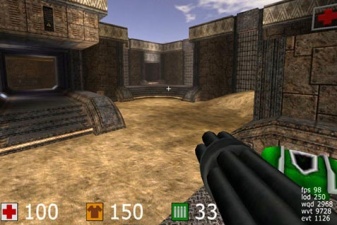 Cube is something of an underground phenomenon. For those who've not crossed paths with it, this is an open source FPS built on a unique programming framework. If you're into such things, here's a snippet from the official description to highlight some of the Cube engine's finer points:

"Cube is a landscape-style engine that pretends to be an indoor FPS engine, which combines very high precision dynamic occlusion culling with a form of geometric mipmapping on the whole world for dynamic LOD for configurable fps & graphic detail on most machines. Uses OpenGL & SDL."

Sounds impressive, eh? For those of us who are more on the receiving side of software, Cube has provided some pretty fantastic free games for several years now, and the news that it's being ported to the iPhone is quite exciting.

Apparently, every single feature of the desktop version is to be ported  including networking and an editor (although the announcement does suggest there's no practical interface for these functions. Hmm). The attached screenshot is from the PC version, but we're hopeful from the gameplay video that there won't be a great deal of difference.

Assuming the Apple Non-Disclosure Agreement allows it (which it should do once it's dropped by Apple) not only will the iPhone Cube be a first rate FPS, it should provide the tools for back bedroom programmers to easily create their own variations and mods.

Cube is currently going through the application process, so in the meantime you can check out the official site (and don't be too shy to take a look at the original PC version, while you're at it) and enjoy the gameplay video below: