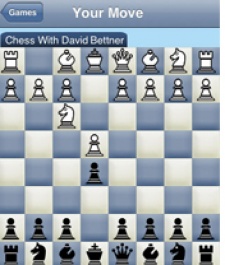 Texas-based firm Newtoy has unveiled its first iPhone game, Chess With Friends, which is due to go live on the App Store in the next few days.

It's one of the first iPhone games to take an asynchronous approach to multiplayer, following in the footsteps of games like Scrabulous on Facebook.

So, players start a game with a friend, and then take it in turns to make their moves. In a way, it's harking back to the days when (some) people played chess by mail, sending their moves through the post.

Like Scrabulous, you can play several games at once, ensuring that every time you fire Chess With Friends up, you'll have at least one move to make.

As TechCrunch points out, the downside of not having push notification on the iPhone is that you can't be told when opponents have moved without launching the game.

But nevertheless, it's still innovative. I can't help thinking that the real killer app for this kind of thing will be a game that runs on iPhone and Facebook and uses players' existing friend network.

Still, who's to say Newtoy isn't working on just that