And why freemium is a no-go 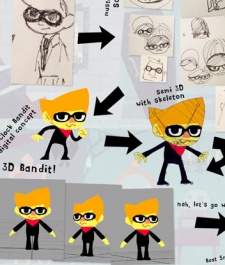 "The closest thing we have to a philosophy is that there are no rules. We're not fans of the idea that there should be a set of sacred guidelines that should always be obeyed.

Since 2010, the Sweden-based outfit Simogo has made a name for itself with creative, visually distinctive iOS titles across a range of genres.

Founded by Simon Flesser and Magnus 'Gordon' Gardebäck, its a studio that has retained its independence despite advances from numerous publishers and platform holders.

In the latest of our company profiles, we chat to Flesser about Simogo's origins, their creative processes and the importance of remaining independent.

"When I started in visual effects, games were in a pretty uninteresting place," says Flesser.

"Then when the Nintendo DS came along things were moving in a really positive direction and lots of really interesting, creative games started appearing, and the urge to work with games got bigger."

The Simogo boys, Simon and Magnus

It was this urge that ultimately led Flesser and Gardebäck to strike out on their own. But it wasnt a Nintendo handheld that made them leave the relative safety of salaried jobs.

"I'd say we were more interested in iOS development than any other platform," says Flesser.

"Apple have made a lot of good, developer-friendly decisions - theres no green light process, you can set your own price, start up costs are low, theyre really good at finding and promoting games - those were the main reasons.

"Also, it's a neat platform as all the different features stimulate the idea process."

Enthused by the possibilities, Simogo was formed with Flesser in charge of art, music and communications and Gardebäck taking on all the programming. The pair share design duties.

"It was somewhat vague at the time, and it changed a lot," says Flesser of the initial concept for Kosmo Spin, Simogo's debut title.

Starting life as a match-three puzzle game, Kosmo Spin eventually evolved into an action title in which you guide a character around a rotating planet, deflecting balls launched from an orbiting UFO and collecting breakfast produce.

With quirky presentation and a well-executed, unique mechanic, Kosmo Spin was a statement of intent from Simogo that picked up favourable reviews from critics.

However, the consumer response was less enthusiastic, leaving the studio in an uncomfortable financial situation.

"It was a bit tough at the start," says Flesser. "Kosmo Spin did so-so. Not terrible, but it didn't really make any big numbers."

It was around this time that the studio started to explore the possibility of external funding, pitching games to the Nordic Game Program.

Among the concepts were Tree, a non-violent game that involved gathering forest spirits around branches and 16GAMES, a spin on the mini-games concept in which you play 16 of them simultaneously.

Simogo did not secure funding for either of these titles.

"This was very early," says Flesser, "and we thought that it might be a good idea to look for funding to minimise risk. Looking back, some of those concepts were somewhat weak.

"We've shifted our mindset a lot since then, and for our own iOS projects we feel comfortable in funding everything ourselves, it puts us in full control of everything."

A contributing factor to this mindset is no doubt Bumpy Road, Simogo's second title, released in May 2011.

"I don't think there is a single thing that can be pointed at," says Flesser, reflecting on the popularity of the game.

"I think it's overall a very welcoming experience, and just by looking at a picture or the trailer you can instantly understand how it works and why it's interesting.

"But I also think a lot of the welcoming touches in the game, such as the art, the music and atmosphere might have made people think that it's a very casual and easy game, when it is in fact the opposite.

"It demands quite a lot from the players  for us a lot of the enjoyment comes from learning to master those controls and physics, while some people might have been left feeling bad at the game for the very same fact."

Regardless, Bumpy Road was a hit, something Flesser doesnt believe was helped by post-release support.

"One thing we learned - the hard way - is that major content updates is not worth it, not for the kind of games we make anyway," he says.

"We did huge updates for Bumpy Road, basically doubling the content, but financially it just wasn't worth it. I wouldn't have it undone though, the game truly came to its full potential with the new extra content."

While Bumpy Road is Simogo's biggest commercial success, its next release - Beat Sneak Bandit - is undoubtedly the critical darling of the studio's portfolio.

The first doodles of the critically acclaimed Beat Sneak Bandit

Released in February 2012 it picked up glowing reviews and innumerable awards, including Best Mobile Game at the Independent Game Festival.

However, the critical response was not matched by stratospheric sales.

"It sold pretty well," says Flesser, "but after all the insane reviews and great response we sort of hoped that it would do just a bit better.

"We're pretty aware that it's a very gamey game, and intentionally uncompromising when it comes to gameplay, so with that in mind it's done very well."

"Though we recouped costs just a few weeks after release, I wonder if Beat Sneak Bandit might have performed better on PS Vita, 3DS, or maybe even on XBLA or PSN?"

Despite the team's disappointment that Beat Sneak Bandit didn't perform more strongly, Flesser has no intentions of adapting Simogo's approach.

"Even though we aren't making crazy numbers, I'm super happy that we can make these kind of games and actually make a pretty decent living out of it," he says.

Indeed it's this philosophy that defines Simogo. The studio makes quality, unique titles that find comparative success without chasing the big numbers, something Flesser believes can be best achieved by remaining independent.

"We've been approached by most major publishers and platform holders, and it's not impossible that we'll make something with the funding from a bigger company, if we feel that they could bring something that we could not do independently," he says.

"I don't think we would be were we are today if we hadn't worked independently like we've done. It's given us the right amount of freedom to create what we want to, and take risks that a lot of publishers probably would not.

"Doing your own thing is always creatively stressful and having your own company is a struggle, but worth it in the end."

Concept art for the cancelled 16GAMES

Even freemium, which has lured many developers with its potentially huge revenues, remains a no go area for Simogo.

"There's a lot of questionable things happening in that space, that we don't want to be part of," says Flesser.

"We want everything about Simogo to communicate quality, and we're not sure a "free" price tag does that.

"And quite frankly I have not played many good free-to-play games. They sort of leave you a little empty, with a feeling that you are interacting with a software mostly produced to generate revenue, so that's another thing that makes it hard for us to be associated with the model."

Walking into the future

Instead, Simogo is pressing ahead with what could be its most ambitious game yet, Year Walk.

"It's a first person 2D adventure, set in a the dark and cold woods of 19th century Sweden, in which you will encounter creatures and other strange phenomena from Swedish folklore," says Flesser.

"It's different from our other games for several reasons. First of all we are making the game with people outside Simogo.

"Daniel Olsén is making the music, Jonas Tarestad wrote the original script that the game is based on and is writing a lot of the text for the game, Theodor Almsten is helping us out with research and Simogo-troubadour Jonathan 'wearethemassacre' Eng is returning with a really neat surprise.

"Secondly, it's not really based on a single mechanic as our previous game  rather it's built around atmosphere and a lot of different interactions.

"And we have one final thing that we have not yet announced regarding the project that we think makes it very unique.

"We're equally excited and nervous by how people will react to the experience. It's a risk for us, but I don't think anyone would like us to play it safe, so in that way it's a natural step."

Looking forward, Flesser believes that Year Walk is vital to Simogos creative future and hints that the studio may be branching out beyond the confines of iOS.

"I think we'll be able to make a lot of different and interesting things depending on how Year Walk is received," he says. "Hopefully we'll be able to continue to produce the games of our dreams like now."

"Either way, it would be cool to stretch our legs on another platform, perhaps?"