Jukka Laakso will give a talk at Pocket Gamer Connects Helsinki on September 11-12 titled Narrative Meets Gameplay - Thief of Thieves: Season One 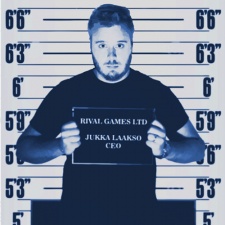 Jukka Laakso is the CEO of Rival Games. At Pocket Gamer Connects Helsinki on September 11-12 he'll be giving a presentation called Narrative Meets Gameplay - Thief of Thieves: Season One. Click here to get more info on the show and to buy your tickets.

As a founder of Rival Games, Laakso has seen the ups and downs, launched games, hired
people, fired people, and made a lot of mistakes. Most importantly he's learned from those mistakes and managed to keep Rival Games alive while negotiating and securing various major IP deals.
He's known as the guy who rarely smiles, gets things done, and is always honest.

A: I've done almost everything except programming and audio as part of the team for the games Rival Games has shipped. Plus I take care of biz dev and some marketing.

A: The major shift from casual to midcore on mobile with Battle Royale -genre making its debut on new platforms.

A: The growth has definitely been interesting with a clear new market leaders on mobile and traditional platforms. The Battle Royale genre has taken the industry by storm, but there is definitely still room for different kind of games on all platforms.

A: Using an established brand to drive player recognition will keep growing.

A: Meeting new and old friends.