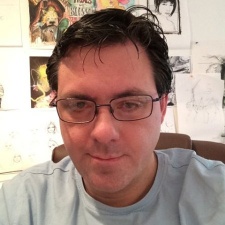 Marcus Pullen is the Managing Director at Blue Donut Studios. At Pocket Gamer Connects Helsinki on September 11-12 he'll be running a panel discussing the future of AR and VR. Click here to get more info on the show and to buy your tickets.

Pullen's background is in art and technology. He was a graphic designer for London agencies, worked in multimedia for IBM. He moved to computer magazine publishing in the mid ‘90s then worked for Internet agencies in the late ‘90s. He ran an e-commerce software development business for over a decade and now he runs Blue Donut Studios. It's just setup a dedicated AR and VR company called Imersar Ltd, and a new healthcare business called RespiAction.

A: We’re a small company and we develop AR and VR for comics, games, culture, and healthcare. I get my hands dirty with asset creation, planning, project management, a bit of server work, and some development.

A: Honestly, I think the best thing is the processing and graphics power in mobile. Phones are much more like portable systems these days.

A: It’s a mature market. However, there’s room for everyone, still. Margins are tough as always and competition for customer attention is very hard. Independents that can flourish in this market are worth study as they are doing something right that is sometimes hard to quantify clearly and repeatably. I do think if you can get affinity and loyalty with your customers it will serve you in sustaining long term growth. It’s a battle to keep it going though and I think it takes more resources to get in front of people than it does to make a game sometimes.

A: The same as the last 12 months. But after that, I reckon the concept of negating the tight grip of the app store owners will bubble up some more as an issue. Look at what Epic Games did with Fortnite on Android - perhaps it won't be the last publisher to try to maximise its margins by dealing direct with its customers. Apple will probably never give up any form of control. If you want to publish on iOS then you have to give so much to Apple. But if there’s a wider phone ecosystem out there it may need to rethink that strategy, but that will be a few years yet. AR Games may see a few new titles and we may just see Switch VR come out. If that were to happen that would lead to a rash of mobile VR headsets but I personally think that will be a move more in the future. Not next year.

A: Talking to people. The industry is full of amazing people and it’s a joy to meet new and existing faces.