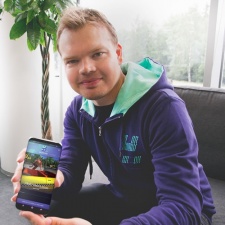 The games industry at large is increasingly embracing cloud tech’, be it to add some extra power remotely to hardware or to stream full-on content.

Either way, its influence is increasing. At the forefront of this innovation is Finnish ‘Netflix for games’ platform Hatch and its cloud gaming platform designed specifically for mobile.

It’s pitched as the world’s first service for discovering, playing and sharing a curated collection of games from more than 100 developers and publishers.

As Hatch is set to headline and sponsor the first ever Cloud Gaming track at Pocket Gamer Connects Helsinki 2018, we thought it a good time to catch up with CEO Juhani Honkala to see what he had in store for us.

PocketGamer.Biz: Could you tell us a bit about your talk at this year’s Pocket Gamer Connects Helsinki 2018?

Juhani Honkala: Cloud gaming, streaming and subscription-based delivery of games are on a lot of people’s minds in the industry, especially after remarks by executives like Ubisoft’s Yves Guillemot: “There will be one more console generation, and after that we will be streaming, all of us.”

People are excited about it, and a lot of us are ready for a change. But there’s also a lot of scepticism and nervousness around the topic too.

What does it mean for players? Is the tech really feasible? How will game developers get compensated fairly for their work? There’s a lot of speculation.

But at Hatch, we already have experience doing this so we’re going to try to clear the air and present some facts and key learnings.

What’s the latest update you can give us on Hatch’s development and performance in soft launch?

What we’re doing, streaming games with high performance and low latency over mobile data networks, is completely new and nobody has done anything like that before so it has taken us some time to test and make sure the overall experience is where we want it to be.

The streaming tech is now very robust and we have introduced new features like leaderboards for games during the soft launch helping to make playing more fun and social.

We have also learned a lot about what types of content perform the best in an on-demand setting. For example, we have found that even though we measure success in gameplay minutes, it’s games like Monument Valley, with barely two hours’ worth of gameplay, can perform really well, with the most overall gameplay minutes.

This may sound counter-intuitive, but on a service like Hatch with lots to play and to try out, players like to be able to finish what they start. In the on-demand based setting, you can have games with beginnings, middles and ends that most people can realistically play through and then move on to the next great experience.

Streaming entertainment is already a huge business on mobile, it just hasn’t come to games yet, largely for technical reasons.

You’re receiving significant investment from Rovio. What makes you so confident that streaming is a business that has a bright future on mobile?

Streaming entertainment is already a huge business on mobile, it just hasn’t come to games yet, largely for technical reasons.

But the consumer benefits, playing together in real time, and eliminating the friction of downloading, installation, updates and app management, are clear and we’ve seen them validated during the soft launch.

The good news is that the technical obstacles are pretty much solved, especially in countries with highly developed mobile infrastructure like Finland, where you can’t even buy a capped data plan.

But Finland’s present is the world’s future. You see massive investments in advanced mobile infra and 5G everywhere, including the US.

That’s why mobile operators like Deutsche Telekom in Germany are keen to partner with us to give subscribers unlimited data when playing Hatch. And with 5G we can truly transform the whole mobile gaming experience to a new level not seen before.

You’re in soft launch in a number of countries right now, what’s the next step for Hatch?

As I said, we want to make sure the experience is right, but the KPIs are good enough now to take the product out of beta in a few markets. We’re getting excited about taking off the training wheels very soon.

But there’s still a lot of work to do after that milestone is reached, expanding the public release to more markets and then piloting the premium paid subscription to complete our business model and to offer even more value to players.

We take a very iterative, step-by-step approach to our go-to-market strategy. More news on that as it develops!

What do you think have been the major trends in the mobile games industry this year?

Since the last PGC in Helsinki the biggest thing that’s happened in mobile is a little game called Fortnite.

It’s an interesting case because, of course, it’s not just on mobile.

In the end it’s all about great games and creativity that matters.

It really showcases the cross-platform nature of games these days, the hardware you play on is less important than the content itself.

Enter cloud gaming. Overall, we have seen lots of positive media coverage about cloud gaming this year and many people seem to agree that to be the future.

It’s not the question of “if” anymore, it’s about “when” and we in Hatch are doing our best to make sure it’s as soon as possible.

What are you looking forward to most at PGC Helsinki 2018?

We are going to launch the first ever cloud gaming track at PGC Helsinki, come over to see my keynote!

We hope to help developers understand how to take full advantage of cloud gaming and design new games that would not be possible to make on other platforms.

Additionally, meeting with our developer friends from across the region is always a highlight.

In the end it’s all about great games and creativity that matters.

Pocket Gamer Connects Helsinki is now just under two weeks away and will touch down in Finland on September 11th to 12th.

To find out more about the fantastic speaker roster, check out the full schedule – and keep an eye out for the latest additions and updates in the run-up to the show.

If you would like to register, you can do so here.