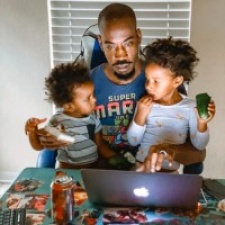 Marcus Howard is the CEO of ProjectMQ, an experiential marketing agency that uses video games to help colleges and other brands more effectively engage younger audiences. He’s also the President of the Tampa Association of Gaming, a nonprofit dedicated to growing the gaming industry and STEM youth programs in the Tampa Bay region.

Howard got Super Mario Bros. 3 on the Nintendo Entertainment System for Christmas when he was six, and he’s been playing video games ever since. Video games inspired Howard’s interest in technology, and in the 9th grade, he started coding his own video game on the TI-83+ graphing calculator. In 2013 he launched ProjectMQ with his identical twin brother Malcolm, to solve the largest problem in the global video game industry: game discovery.

Five years later, PayPal selected ProjectMQ out of 20,000+ applicants nationwide, as the top digital service of their 2018 business contest. In 2019, he co-authored The Business of Esports book that was published by the University of South Florida. Marcus was a featured speaker on the Tampa Bay and the eSports Industry panel at the University of South Florida’s 2019 Esports Summit, and on the Level Two & Beyond: The Future of Esports panel of Skillshot Media’s 2019 Esports Summit at the Georgia World Congress Center.

Howard will be sharing his thoughts on how blockchain will take esports to the next level at Blockchain Gamer LIVE! Digital #1.

Before the September event, we caught up with Howard to see what’s changed in the games industry since he joined and what trends he expects to see over the next 12 months in the industry.

PocketGamer.biz: Tell us a bit about ProjectMQ.

Marcus Howard: ProjectMQ is an experiential marketing agency that uses family-friendly esports to help colleges and other non-endemic brands more effectively engage younger audiences. ProjectMQ has helped some of the largest and most respected brands in the country, like Junior Achievement, Consumer Technology Association, iHeartMEDIA, and Beasley Media Group.

Work with an indie game team. 75% of all (PC) video games are created by indie game developers, but indie games only receive 2% of the revenue in the global $152B industry.

I got Super Mario Bros. 3 for Christmas when I was six, and have wanted to work in the gaming industry ever since. I created that opportunity in 2013, when my identical twin brother and I launched ProjectMQ, as a multimedia search engine exclusively for indie games to solve the global game discovery problem. In 2019, we pivoted ProjectMQ from an indie game search engine, to the experiential market agency that features indie games.

Work with an indie game team. 75% of all (PC) video games are created by indie game developers, but indie games only receive 2% of the revenue in the global $152B industry. Having worked with indie teams for seven years, I know that many of them are bootstrapped startups and are grossly understaffed.

If you are willing to volunteer 5-10 hours per week to a team, it helps you build your network/experience and potentially gets that team to a place where they can afford to pay you. If they can't get to a point where they can pay you, you've at least gotten your foot in the door with the gaming industry, you now have relevant work experience that will be valuable to other gaming companies and you have a gaming company that can write a letter of recommendation to vouch for your work.

The gaming industry regularly discriminates against people of color and women. African Americans make up 12% of the US population, and 21% of avid esports fans, but only 2% of gaming industry professionals. Also, with the exception of the 2K league and the Fight Game Community, African Americans have practically no representation in the competitive gaming scene (League of Legends, Call of Duty League, etc.) as players, professional staff, or owners. It is one of the reasons that the esports industry is a bubble.

Blockchain brands will continue offering grants/funding to indie developers and the platforms that support indie developers, because 75% of (PC) games are created by indie devs, and innovation within the indie game community is the quickest/easiest way to mainstream adoption of blockchain/cryptocurrency.

Unfortunately, the game discovery issue has consistently gotten worse since I joined the industry in 2013. It's so bad now, that 2nd party developers are folding, and even former AAA star talent can't be successful on their own. Luckily, I've also seen an uptick in AAA publishers signing and acquiring indie teams.

Which part of the event are you most looking forward to and why?

I'm always most excited about the opportunity to network with other innovators in this industry. I'm building a one-of-a-kind charity STEAM/Gaming/Esports event next year, when the Super Bowl comes here to Tampa Bay. I'm eager to connect with the blockchain gaming startups who will be attending the July 14th event, to learn how I can partner with them to incorporate their platforms and games into that experience.