“I think over the next year we'll see the games industry work hard to offer people more meaningful ways to connect with each other through games since our “normal” ways of connecting have been greatly disrupted.” 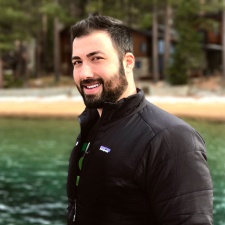 Chris Akhavan oversees global business development, corporate development, and advertising revenue for Glu Mobile. He’s created and led long term partnerships with Disney, Major League Baseball, Apple, Google, Facebook, and many others during his time at Glu Mobile. In addition, he’s been key in driving successful acquisitions including PlayFirst, Crowdstar, and Pick6 Studios which drive the vast majority of Glu Mobile’s revenue today. Akhavan brings to Glu Mobile a strong background in mobile advertising which he leverages to lead the organization’s advertising revenue – a business he’s grown to over $50m/year since joining Glu Mobile.

Prior to Glu Mobile, he served as Senior Vice President of Global Partnerships for Tapjoy where he was a key early member of the team that built a leading mobile advertising and monetization platform. Akhavan was instrumental in building and scaling Tapjoy’s commercial operations globally. Before joining Tapjoy, Akhavan held positions at RockYou!, VideoEgg and Yahoo!, while also holding a B.A. degree in Economics from the University of California at Santa Cruz.

Akhavan joins the speaker lineup for Pocket Gamer Connects Helsinki Digital 2020 where he will be discussing with a panel why your publisher pitch is not working on investors.

Before the event takes place, we caught up with Akhavan to see what’s changed in the games industry since he joined, and what trends he expects to see over the next 12 months in the industry.

PocketGamer.biz: Tell us a bit about Glu Mobile

I've been a hardcore gamer from an early age. A lot of my youth was spent on various consoles – Final Fantasy, Resident Evil, Sonic, and Metal Gear are some of my favorite franchises. I'm still a hardcore gamer, these days I spend most of my time playing competitive PC shooters like Valorant, Counter-Strike, and Fortnite. As a lifelong fan of games, it's always been an aspiration of mine to work in the industry.

I'd recommend spending a lot of time playing top games (beyond games you personally like) to become well-versed in what drives a successful game. I'd also recommend being willing to find your entry point in whatever capacity you can. My first job in gaming was a part-time QA role I was able to get while in college. That role gave me a chance to get exposed to various aspects of game development (as well as my first exposure to an infinite supply of energy drinks).

The pandemic has brought record high audiences as people turn to gaming while in various states of shelter in place. I think over the next year we'll see the games industry work hard to offer people more meaningful ways to connect with each other through games since our “normal” ways of connecting have been greatly disrupted. This will lead to some really innovative new experiences showing up in games (the Travis Scott concert in Fortnite was a good example) which I’m really excited for.

I'll just speak to what's changed the most since I first joined Glu Mobile specifically. When I started in 2013, the company was cranking out new games all the time. The model back then was somewhat focused on launching new games, generating revenue from them for 9 or so months, and moving on to the next game. Fast forward to present day, and the business is dramatically different. We focus the vast majority of our resources on what we call our Growth Games; games that we believe we can grow over the course of multiple years. For us, that includes games like Design Home, Covet Fashion, and the MLB Tap Sports Baseball franchise. Along with that, many aspects of our business have evolved to support this long-term, LiveOps focused model.

A big part of my current role and focus is on M&A. That means getting out and meeting with game studios. While this used to happen in-person, my team and I have pivoted these meetings to video calls. It’s great to see conferences continue to optimize their approach to suit the current environment and facilitate those connections. I'm looking forward to meeting new teams, and exploring potential partnership opportunities with them at Pocket Gamer Connects.