What will game creators learn from the award-winning novelist, Doctor Who screenwriter and Marvel comic creator? 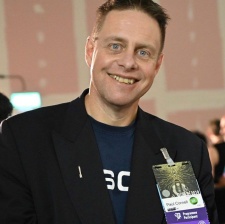 There’s a surprise in store for attendees at this week’s Pocket Gamer Connects Helsinki Digital. Not the fact that it’s not in Helsinki – you always knew that. It’s 100% online (thanks a bunch, COVID-19) and you can tune in from the comfort of your home office, via Zoom.

No, the surprise is an entire track dedicated to media outside video games. The Beyond Games track takes place on Friday, September 18th, and it’s crammed with talks and panels that look at the wider creative scene. You can expect terms like transmedia and metaverse to make their appearance, and you can also expect to hear some inspiring talks from individuals with truly great experience in music, film, comics, TV and more.

We’re thrilled that one of our guest speakers this week will be Paul Cornell. The name will be familiar: if you’re remotely interested in science fiction, fantasy and popular culture, you will have encountered his work.

He’s written some of the best episodes of TV’s Doctor Who, he’s scripted episodes of Elementary, Primeval, Robin Hood and many other TV series, including his own children’s show, Wavelength. He’s worked for every major comics company, including his creator-owned series Saucer State for IDW and This Damned Band for Dark Horse, and runs for DC on Batman and Robin, and Marvel on Wolverine, Captain Britain and Young Avengers.

Games can involve the player more in building character, in letting each decision a player has a character make impact on their later range of decisions

Paul is the writer of the Lychford rural fantasy novellas from Tor.com Publishing, and the Shadow Police novels. He’s the co-host of Hammer House of Podcast and has three new creator-owned comics series underway in 2020. He’s won the BSFA Award for his short fiction, an Eagle Award for his comics, a Hugo Award for his podcast and shares a Writer’s Guild Award for his Doctor Who. He’ll be joining us to talk about creating compelling characters.

“I did want to work in the games industry, but then I took an arrow in the knee,” Paul tells us. Of Pocket Gamer Connects, he confesses: “I love attending events in fields about which I know little, but which are fascinating. I hope to learn a lot.” We caught up with him recently to chat about his experience and what you’ll hear from him at the conference.

PocketGamer.biz: You’ve written in some amazing shared universes, from Doctor Who to Marvel, and others along the way. What’s the biggest challenge you have to overcome when writing for an existing series/character?

Paul Cornell: Sometimes it's about pushing against the popular perception of the character. When I inherited Captain Britain, he was widely known as a funny drunkard, which wasn't actually the case, but the big moments of that had come to define him. So I played him really straight and re-invented him a bit. Oh, and there's actually writing the word Doctor in a script and then having to put some dialogue under it. Bit daunting.

You’ve created some memorable characters. I’m sure you love all your creations equally but do you have a fond favourite?

Bernice Summerfield, who I created for a Doctor Who novel range, still has her own line of audio dramas twenty five years or more later! She's grown up and is now doing her own thing, and I'm hugely proud.

What are you currently working on?

I Walk With Monsters is a modern, very real, horror comic series from The Vault, that I'm writing for the incredibly talented Sally Cantirino to draw and for Dearbhla Kelly to colour. The first issue's out on November 11th. I've found it gives me the chance to talk about a lot of real stuff concerning cycles of abuse, male violence, etc.

It's about budgeting information. In prose you can get in the character's head and let their thoughts fill people in. In comics and on TV it's about actions and then dialogue

You’ve written novels, comics, TV screenplays… Is the process of creating characters and a storyline the same regardless of the medium?

I think it's about budgeting information. In prose you can just get in the character's head and let their thoughts fill people in on who they are. In comics and on TV it's about actions foremost and then dialogue.

Hollywood’s Joseph Gordon-Levitt recently said that videogames are “the future of storytelling”. What do you think – if anything – comics, books and TV have to learn from modern video games? Or vice versa!

I think games can involve the player more in building character. I don't mean in stats terms, I mean in letting each decision a player has a character make impact on their later range of decisions. I think players will gradually start to be able to grow characters by opening up and narrowing down their range of choices. That gives players proper control of the narrative.

And as the power to make sandboxes bigger increases, those character choices can start influencing game outcomes too. How about we send our character off on an entirely different quest, because we've made a series of choices that divorces them from the central plot? One day, the narrative will be able to follow them along that new branch. Which tends toward the business of creating actual realities.

What will be the thrust of your talk at Pocket Gamer Connects?

How game writers can apply the lessons of character building from other narrative forms, using some examples from all the media I've been involved in.

You can find out more about Paul and sign up to his newsletter at his website www.paulcornell.com.

The Pocket Gamer Connects Helsinki Digital conference spans five days and will feature a broad selection of tracks, talks and speakers, as well as essential fringe events and a MeetToMatch meeting platform. To find out more and book a ticket – you’re still just in time – please head to the official event website.