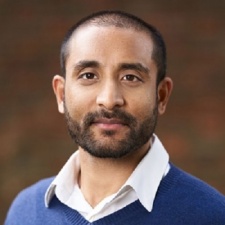 For today's spotlight, we spoke with NumberEight CEO Abhishek Sen, who co-founded the London-based company that is developing AI software to predict user context and audiences using sensors in mobile devices.

At PGC Digital #6, Sen will host a talk on 'The crossroads between edge computing, privacy, and ad monetisation'.

We develop best-in-class artificial intelligence software for mobile devices to detect the real-world context of a user (such as running, commuting etcetera.) from sensors present in the device and package them neatly to deliver ID-less audiences (like frequent joggers, culture vultures etcetera.).

Among many things, I try to hire ambitious and bright people to help take the amazing technology we are building to market.

I didn’t set out to work in games. The initial idea was for my SoundCloud app to automatically suggest songs based on what I was doing at the moment. An example of this is by working out, studying in the library, and so on.

The transition to games was quite natural as contextual recommendations can also be used for real-world customisation of ad-monetisation and IAP optimisation. A lesser-known fact is that I’m not an avid gamer, but was addicted to Stronghold Crusader during college.

There are many roads to games. To be successful, you need to know what you are especially good at and focus on your own competitive advantage. That doesn’t necessarily have to be something that you would associate with games or the gaming industry, but rather something new and different you can bring into this world and use that innovation to push the industry forwards. You must enjoy what you’re doing though, especially on days when things get difficult.

Games have experienced a significant boom during the pandemic. It will be interesting to see how this trend continues as people come out of lockdowns and the impact it has on screen time.

Amidst all of this, the upcoming privacy changes from platforms such as Apple and Google have left the gaming industry guessing, with app developers unsure of their impact on their monetisation and UA efforts.

One of the major trends that will emerge is the rise of first-party data, especially as the new privacy changes kick in and app publishers strive to maximise their resources to mitigate potential revenue losses. With ad monetisation losses estimated to be between 40 to 50 per cent, we might see publishers looking for new monetisation tactics, in the form of new ad types and placements (such as audio, in-play etcetera.), and/or new forms of monetisation such as subscription.

Current trends such as the consolidation of ad networks could also result in app-publishers using more vertically integrated ad monetisation solutions. Moreover, there is a real possibility that IAPs will become more important than ever, and IAP optimisation and best practices will become critical for game publishers’ success.

Personally, I most look forward to listening to new ideas, innovations and issues currently faced by the industry. There is so much knowledge that can be gained from sharing our experiences and coming together as a community to solve shared problems. That can be achieved by attending speaker sessions, and also by just having a frank and open conversation with different stakeholders.

Why Darewise CEO Benjamin Charbit on the beginning of metaverses