Ensuring the inclusion of people with disability in gaming and esports, with Big Karma's Pascal Clarysse

"We want to give them a platform through which they can shine for their merits rather than condescending pedestals." 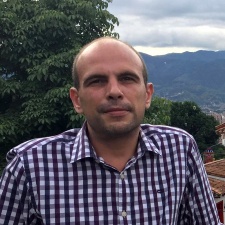 Pascal Clarysse is the CEO and co-founder of Big Karma, a startup based in Malta focused on inclusion of people with disability in gaming and esports. Clarysse has been around the gaming industry for more than two decades as a marketing specialist and entrepreneur, and has served for high profile companies such as Lik-Sang.com, Seriously, Ubisoft Mobile, Eden Games, Nazara, Space Ape, Garena Free Fire and many more.

He takes part in a panel at Beyond Games to talk about the fusion of the zeitgeist between all entertainment forms and what it means for brands, creators and consumers.

Before the brand new online event explores the intersection of games and other creative industries next week (May 10th to 14th), we caught up with Clarysse to see which innovations in the creative industries have impressed him and how games contribute to other media.

Tell us a bit about your company

Big Karma produces a unique mixed sports strategy game for mobile, which we call the 'Pokémonization of Sports'. 30 athletes from 15 nations are involved as playable characters under license, including a vast majority of Paralympic athletes with disabilities, which offers various cool gameplay twists and gives us a chance to represent an oft-ignored community of 1.7 billion people in media and gaming. We want to give them a platform through which they can shine for their merits rather than condescending pedestals.

As a CEO, I'm merely providing my fantastic co-founders with the resources they need to reach our goals in their own good way. When there are conflicting views between approaches, I try to mediate the situation between our smart leaders towards a consensus that keeps us driving forward as a united team.

How did you join the industry?

I've been playing games since age 7. One day in 1998, I found the Internet running a library computer at the university while studying economics. As I realised I could import goods from Hong Kong to Brussels, where I was at the time, this made me drop out of college to start a company. Back then, it wasn't clear what the path to working in gaming was - or that it was even possible. I ended up getting an accidental career in one of my biggest passions before even daring to wish for one.

Ultimately, it's not about ideas - it's about execution. So learn to DO things or to MAKE stuff. Learn a craft and master it by accepting to suck and fail at it for a long while. Video game development is a team sport. One learns soccer by kicking the ball thousands of times, rather than studying the ball in well-written books. Reps, reps, reps - it's the only way to learn something.

It feels to me like it keeps changing every year and that's precisely why I still love it so much still today; 23 years in. Gaming industry years are like dog years - they go by seven times faster.

The most notable change is how executives in other industries view us. We used to be viewed as some afterthought licensed product next to toys. Nowadays, sports, TV, cinema and music look at us as equals, if not even with envy at times. We are treated as partners.

What innovations have impressed you in recent months?

The growth boost of the pandemic on our trade was quite impressive. This being said, I've always known video games growth being the story of the year pretty much since I was a kid, in good years and bad.

I also particularly appreciated the final transition to remote work, which was theoretically possible pretty much since 2002, but was greatly accelerated under pressure. There are a lot of positives to take away from this shift, about the resilience of people in our industry, as well as how it will open up new opportunities for people from areas where working in the industry was, up until recently, still a dream.

More inclusion and more diversity at product level. Actual representation of minorities... Because ultimately it's good for business!

A fusion of the zeitgeist: all entertainment forms blending together into a next-generation spectacle in which the frontiers are blurred. Expect the most surprising collabs.

I really love the panels where differing views lead to new refined nuances over complex topics.

To hear Clarysse discuss media convergence next week at Beyond Games, make sure you book your ticket now. Mid-Term prices offer savings of up to $140, but hurry - the offer ends at midnight THIS THURSDAY, May 6th.

The superstar schedule for Beyond Games is now live!

May’s Beyond Games conference was epic, and there’s more to come…