Why studios need to do more than just port

May 15th, 2013 - 05:40pm
By Carter Dotson, Stateside columnist
Chicago-based Carter Dotson is a senior writer at 148Apps.com, which was acquired by PocketGamer.biz publisher Steel Media in 2012.

The lines between PC and mobile are increasingly blurring thanks in part to the rise of digital distribution, the access it offers, and the simple fact that more players are taking advantage of it.

It's something that rings true on both markets.

Do not be fooled, however - the PC and mobile are still quite different, and getting the word out about the same game can be quite different depending on where the game is.

I've spoken to multiple developers who have gone through the transition in both ways with their titles, and the challenges that come with marketing on PC versus on mobile are not to be ignored.

From out of the dark

The firm has been releasing an iOS version for the past three years as iOOTP Baseball, though it isn't just a straight port. Indeed, PR and marketing manager Brad Cook told me adapting the series for iOS has been quite a big deal. While he says this is in large part due to the lesser hardware power of smartphones and tablets versus computers for creating realistic simulations, the studio has also used this as an opportunity to create a different product in its own right.

"As a result, we highlight the casual aspect of [iOOTP] as much as we can," said Cook.

"Sometimes people say that the PC and Mac game is a bit overwhelming for them because there's so much you can do with it, so I always offer up iOOTP as a 'starter sim,' so to speak."

The studio has released three iterations of the mobile version of the series, and Brad Cook advocates learning and taking advantage of the intricacies of the mobile platform when marketing.

"I would say that developers should build relationships with folks at Apple," he added.

"That can go a long way toward folks at Apple deciding to highlight your app in the store."

However, having that previous track record on PC can help out as well: "We already had an established record with OOTP when iOOTP 2011 came out: The PC and Mac game was at version 12 at the time, and this year it's up to version 14, with three editions of iOOTP under our belts at this point.

"Apple knows we're serious, so that helps give them confidence in supporting us - they'll be reluctant to help you if they think you're a fly-by-night operation looking to throw a couple apps out there and make some easy money."

Strike while the iron is hot

Nigel Lowrie of Devolver Digital, a multi-platform digital publisher that recently released Dungeon Hearts on PC and iPad, warns that the coverage of mobile games is much different, so striking while the iron is hot near the game's release is key.

He says that "the general coverage of mobile games from announcement through development and well into launch is not as in-depth when compared to PC or console so your window of marketing the game is smaller.

Even more "expensive" mobile games are under $10 so it's less about generating interest and purchase weeks or months in advance but rather you focus on awareness of the game just prior to and through launch." 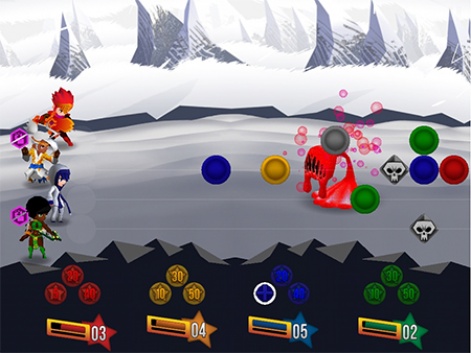 This is undoubtedly true. Few games on mobile have or are even worthy of lengthy hype cycles thanks to the neverending multitude of regular, high-quality releases.

So what does one need to do when marketing a title on mobile?

"For the most part, games need to be highlighted for their unique and interesting elements regardless of platform - convince the gamer why it's worth their time to check out your game," says Nigel.

"With mobile it seems much more important to clearly communicate how the game is played and to show gameplay in action.

"The mobile consumer has a lot of options, most of them with no price barrier to entry, so ultimately word of mouth is the most powerful marketing tool, whether that be in reviews or true person to person buzz."

Elicia Basoli, an independent marketing consultant, reiterates that mobile is all about the shorter amount of time to succeed.

"With console and PC, you have months leading into a release to build a community, line up previews and features with media, and blow out advertising and other tactics," said Basoli.

"With mobile, that process is often condensed into a 3 month - or shorter - period. As a marketer, youve got to have a greater impact in a shorter amount of time."

But what helps gain the attention of the press and the folks who decide what games get featured on the app stores?

"Succeeding has everything to do with finding the right 'story' to help market your game," she added.

"Sure, your game is fun. But, there are lots of fun games out there. Why is it different? Why are you different? Is the main character unique? Do they have a story? Will this game change lives? How? Center your marketing campaign around its innovation and it is bound to get noticed."

Going the other way

It's not just a one-way street, either. Jumping from mobile to PC is also becoming a viable option and it's something that comes with its own challenges.

Jo Lammert of White Whale Games, known for God of Blades, says that it's not inherently easier to promote on PC after working on mobile.

"PC gamers are a very different breed than a mobile gamer, so there were a lot of things to consider while promoting the PC, Mac and Linux version. We really wanted to just emphasise that a lot of love was put into this release- this isn't a lazy port of our mobile version." God of Blades on iOS

One thing her studio did was to introduce new modes to their game that emphasise multiplayer and take advantage of the more powerful hardware available.

However, even for a three-person studio with a minimal marketing budget, their work has paid dividends, and that legitimacy of having a pre-existing product has helped when going from mobile to PC as well.

"Throughout all of our marketing endeavours, it's taken a lot of patience and persistence, and a 'leave no stone unturned' attitude, all of which I think is important for any small development team. It can be exhausting, but definitely worth it, as we've made a lot of valuable connections with journalists, developers, and our fan community.

"A lot of people have stuck up for us, promoted God of Blades through word of mouth, and have given us valuable advice."

For developers going one way or the other with their games, the lesson is simple: just because the game is the same doesn't mean that you can promote it the same.

Make sure the game fits the platform and do the work necessary to adapt it if possible. Be cognizant of the differences, and take advantage of them where necessary.

Reply
Josh Presseisen
We just put Ravensword on the Mac - should be interesting to see how it does compared to Android and iOS.
Posted 9 years ago