Stateside: Why Google should shelve its plans for an Android unconsole

Giant should stick to what it does best

July 3rd, 2013 - 05:30pm
By Carter Dotson, Stateside columnist
Chicago-based Carter Dotson is a senior writer at 148Apps.com, which was acquired by PocketGamer.biz publisher Steel Media in 2012.

Unconsole enthusiasts may currently be buoyed by Android-based devices like Ouya and GameStick, but the storm clouds of Apple TV and official iOS gamepads are rolling in from the coast.

Don't think that's the only threat to this new, and currently independently-led sector, however. Indeed, the biggest immediate threat to Ouya and co. may be actually come from the firm behind the very platform they're all tapping into: Google.

Rumours about the firm releasing an unconsole of its own are building.

Now, on paper, there are lots of reasons why the prospect of Google entering the fray, stamping down its foot and shouting "this ends now" may seem exciting  namely, the prospect of an unconsole that directly taps into the marketplace behemoth that is Google Play.

The advantages are plain to see.

Google has millions of credit cards on file already and Google Play gift cards have widespread retail availability. The search giant also has a media library that would provide compelling secondary features that the Ouya doesn't have (yet).

The built-in HID gamepad protocol would mean that hundreds (if not thousands) of games on Google Play would work with the unconsole at launch - barring any hardware issues - meaning that developers could make money without having to actually do anything.

A dominant Google Play unconsole system would be for the best for developers. On paper, it's the superior option. 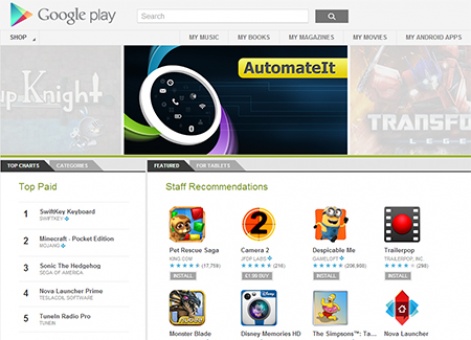 Google Play would be an undoubted advantage

But, lets snap back to reality for a second. What reason is there to believe that Google could launch a successful unconsole in the first place?

Google hardly has the best of track records when it comes to launching hardware. Sure, the company has managed to foster itself a grand retail footprint, but Nexus hardware as hardly set the world alight.

Phones and tablets aside  which, incidentally, are handled by third-parties  perhaps Google's most embarrassing moment hardware wise was the Nexus Q.

Unveiled with a fanfare at Google I/O 2012, the media streaming devices was quietly dropped months later thanks to negative feedback from the firm's consumer base.

Even when you bring phones and tablets back into the equation, the situation doesn't improve all too much.

While Google sells Nexus phones unlocked and contract-free online, they've only been available through the carriers at standard retail channels.

The Nexus 10, on the other hand, might as well not exist at retail. The Nexus 7 has a moderate retail footprint, including Walmart and GameStop locations, but it pales in comparison to what Amazon and Samsung have mustered for their Android tablets.

For what is an absolute giant of a company, Google appears to have real issues when it comes to distribution. It would take a real leap of faith to think that the firm would be able to launch any unconsole successfully at retail, even with the Google name behind it.

In comparison, Ouya has at least generated a footprint at retail. In the US, Best Buy and GameStop sell units in store rather than just online, and on the web, Amazon is a notable backer.

Plus, there's a good chance Ouya is clever enough to try and simulate massive demand. Only select Best Buy locations sold the device on launch day, with each store only able to boast 'limited stock'.

For example, only one Best Buy in the whole of th Chicago metropolitan area actually received systems for day one, and GameStop stores were restricted to just pre-orders. Likewise, Amazon quickly sold out, purportedly until August at one point, but since restocked them.

It's either clever trickery, or maybe Ouya simply didn't have enough supply to fulfill launch demand, what with some Kickstarter backers having still not received their hardware yet.

The point is, Ouya is already in stores, successfully playing the distribution game, and will soon be joined by other so-called Android 'forks'. Google is a long way off getting anywhere near such a set up.

Not such a smart move

Also consider that Google has tried to push out TV boxes many time, and each time the company has failed. Google TV  the firm's own Android fork, designed to power smart TVs and set-top boxes for years to come  has, to put it frankly, flopped.

Of course, it could be argued Google TV was a casualty of the market: consumers aren't exactly taking to any smart TV platform in big numbers, but it's fair to say Google is yet to make a case for the medium with consumers.

As such, there's little evidence it would be able to convince traditional console consumers to make the leap to the unconsole market, either. 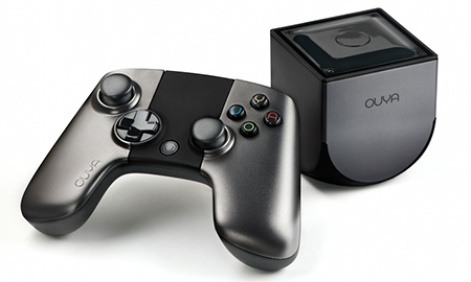 Ouya already has an impressive presence at retail

Heck, even in its own backyard, Google struggles to dominate. The firm's HID controller protocol for Android isn't top dog, largely in part to the wealth of third-party Android APIs floating around. If the addition of Google Play was the only advantage a Google unconsole could boast, would it really be enough?

All developers can hope for is that Google does what it does best: improving on existing functionality to achieve ubiquity.

The opportunity is there for Google to improve the Android TV experience so that those who build on it will have better products.

This means developing Android's 10-foot interface. It also means improving discoverability for controller games on Google Play, so that any Android media player could become an unconsole, and dissuading the use of third-party APIs.

Playing to its strengths

Where Android undoubtedly has a deficiency as an OS (in the eyes of some, at least) is that its open nature makes it almost impossible for third-parties to take ownership of it. Because there are multiple contenders, no-one is able to lead the charge.

For example, see how no one third-party managed to dominate in the field of social gaming features and controllers, despite Google doing little to create or promote its own methods for years.

As such, Google succeeds when it builds services that integrate and improve on what people are already doing - like search engines, email, and mobile phone operating systems.

Google is not a company that does big and sexy products, but it can pull off ideas  and they're ideas that, in turn, should be used to empower those that do have the sexier ideas in their arsenal.

Sexy ideas like Ouya and GameStick, and whatever other manufacturers want to build out from the Android platform. Indeed, if Google wants to serve up a genuine rival for any app-based Apple TV, it should shirk launching its own devices, and instead help fortify Android's unconsole market by supporting Ouya and co., rather than taking them on.

As alluring as a Google Play equipped unconsole may be for developers, they'd be better off crossing their fingers and hoping Google doesn't move to add one more fragment to what's an already-fragmented market.

Reply
Simon Edis Game Designer at Ezone.com
You've got some excellent points Carter. From a developer's point of view I've pretty much had it with all the different APIs required to tie-in to all the different stores. In the end we decided to launch our game 'Diversion' on Ouya for free with no IAB. Jumping through all the hoops to add Ouya transactions was going to double or triple our porting time, so we decided to just get it out there and see if there is enough uptake to justify the time/effort it would take add their API. We plan to do the same with GameStick. I don't think any of the unconsoles realised how hard it would be to create and run a storefront.

Now, if Google decides to enter the unconsole market it would be a no-brainer for us - we already have HID controller support and Google IAB in Diversion so it would be available and making money for us from day one.
Posted 8 years, 10 months ago

Reply
James Coote
The arguments for why a google console might fail are pretty weak. However, the point about supporting other OEMs is important.

If google are seen to wait for others to take the risk, then steamroll them with their own hardware and marketing muscle, other OEMs thinking about using android in their latest fridge-freezer or car wash might pause for thought / ask if the same thing will happen to them
Posted 8 years, 10 months ago